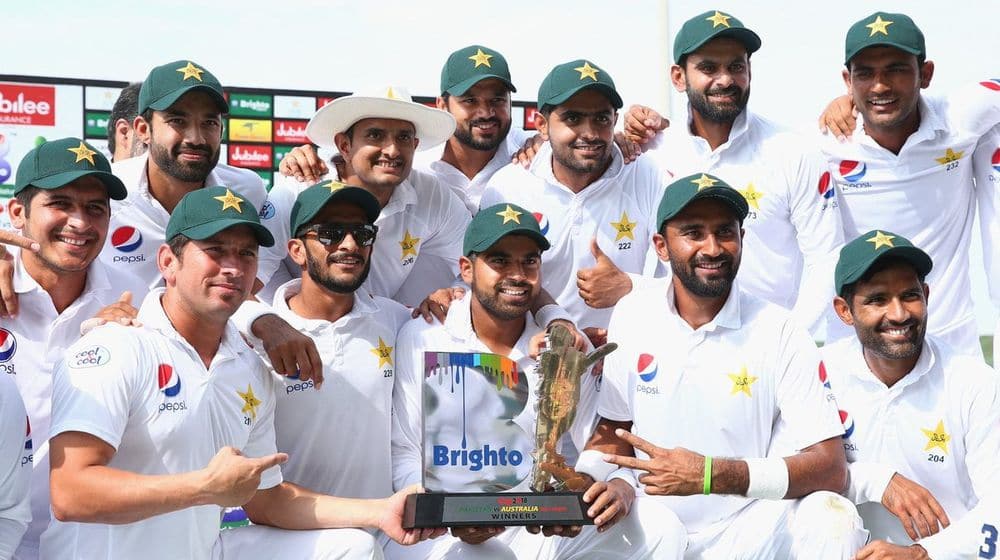 Pat Cummins-led Australia will be arriving in Pakistan on Sunday for a historic three-Test, three ODIs, and one-off T20I tour, their first to the country in nearly 24 years.

This will be Australia’s ninth Test tour to Pakistan while between 2002 and 2018, the Aussies played four Test series against Pakistan at neutral venues (UAE and England).

Below is a brief recap of Australia’s tours to Pakistan and the series hosted by Pakistan in neutral venues.

Karachi’s National Stadium hosted the first-ever Pakistan-Australia Test on Pakistani soil between 11th to 17th October 1956 in the one-off Test. Legendary pacer Fazal Mahmood was the star performer for Pakistan with 13 wickets as the Abdul Kardar-led side recorded a thumping nine-wicket win.

Australia’s first-ever Test series in Pakistan comprising of two or more Tests was staged in 1959-60.

The Richie Benaud-led Australian side won the first Test in Dhaka by eight wickets before sealing a series win in Lahore by registering a seven-wicket win. The third and final Test of the series was drawn in Karachi.

A one-off Test in October 1964 in Karachi between the two sides turned out to be a high-scoring affair that ended in a draw. Debutant Khalid Ibadullah scored a century on debut for Pakistan while Australia’s legendary batter Bobby Simpson who later coached the Australian side to great success in the 1980s and early 90s scored centuries in each innings for the visitors.

Pakistan won the three-match series 1-0 courtesy an eight-wicket win in Karachi. Left-arm-spinner Iqbal Qasim took 11 wickets to spearhead the victory charge for the Javed Miandad-led Pakistan. The other two Tests played in Lahore and Faisalabad ended in draws.

Pakistan recorded a 3-0 series sweep in the 1982-83 series. Mohsin Khan and Zaheer Abbas topped the batting charts for the hosts as Pakistan batters dominated the Australian attack. Leg-spinner Abdul Qadir was the destroyer-in-chief with 22 wickets in the series. Captain Imran Khan took 13 wickets. Pakistan won the Karachi Test by nine wickets, Faisalabad Test by an innings and three runs, and the Lahore Test by nine wickets.

Skipper Javed Miandad scored a memorable double century as Pakistan recorded their then biggest Test victory in terms of runs by routing Australia by innings and 188 runs in the first Test of the 1988-89 series played at Karachi’s National Stadium. The series ended in a 1-0 triumph for the hosts with the Faisalabad and Lahore Tests ending in draws.

Pakistan recorded one of the most thrilling victories in Test history as they won the Karachi Test of the 1994 series by a mere one-wicket margin. Captain Saleem Malik then scored a match-saving double century in Rawalpindi and a match-saving century in Lahore to ensure a 1-0 victory for his side against the Mark Taylor-led Australians. Taylor made his captaincy debut in the series and bagged an unfortunate pair in the Karachi Test which was his first as captain.

Australia’s 39-year wait for a series win in Pakistan ended in 1998 when the Taylor-led side won the three-match series 1-0. Australia won the opening Test in Rawalpindi by an innings margin. Taylor then redeemed himself for the pair in Karachi four years earlier by smashing a triple century in the Peshawar Test. After a high-scoring draw in Peshawar, a century by Ijaz Ahmed helped Pakistan salvage a draw in Karachi.

The two sides clashed in a three-match series in the UAE, a new-look Pakistan side led by Waqar Younis and missing star batters like Inzamam ul Haq and Mohammad Yousuf was clean swept 3-0 by the Steve Waugh led Australia.

Pakistan were bowled out for 59 and 53 in the second Test in Sharjah, in a span of two days Pakistan recorded their lowest-ever totals in Test cricket.

A two-Test series was staged between the two sides in England. After losing the Lords Test by a comprehensive margin, Pakistan registered their first Test win over Australia in nearly 15 years with a thrilling three-wicket win at Headingley Leeds. Mohammad Amir with seven wickets starred in the historic victory for Pakistan.

Pakistan registered their first series win in 20 years over Australia by recording two thumping victories in Dubai and Abu Dhabi to clean sweep the two-match series 2-0. Younis Khan, Ahmed Shehzad, Azhar Ali, and Sarfaraz Ahmed starred with the bat. Captain Misbah ul Haq recorded the then joint-fastest Test century in the Abu Dhabi Test. Leg-spinner Yasir Shah and left-arm-spinner Zulfiqar Babar ran through the Australian batting line-ups time and again in the series to ensure resounding victories for the hosts.

Pakistan won the two-match series 1-0. The Sarfaraz Ahmed-led side was held for an exciting draw in the first Test in Dubai before Mohammad Abbas’ heroics with the ball ensured a comprehensive 373-run win.