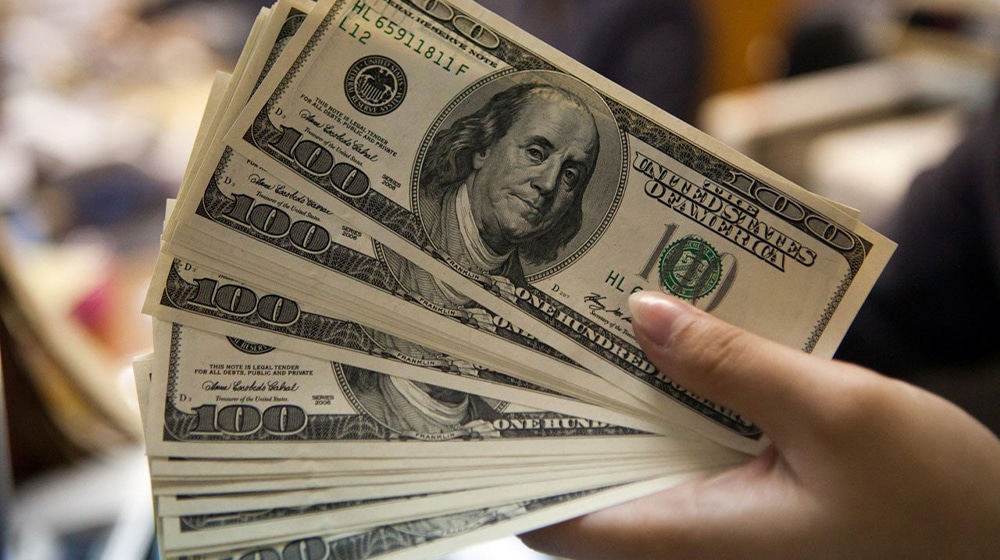 The Pakistani Rupee (PKR) maintained its positive growth against the US Dollar (USD) and posted record-breaking gains during intraday trade today, rising by the highest margin in years.

It appreciated by 4.19 percent against the USD and closed at Rs. 228.80 after gaining Rs. 9.58 in the interbank market today. The local unit quoted an intra-day high of Rs. 226.15 against the USD during today’s open market session. However, since the regime change, the greenback is still up by Rs. 40.93 against the PKR. 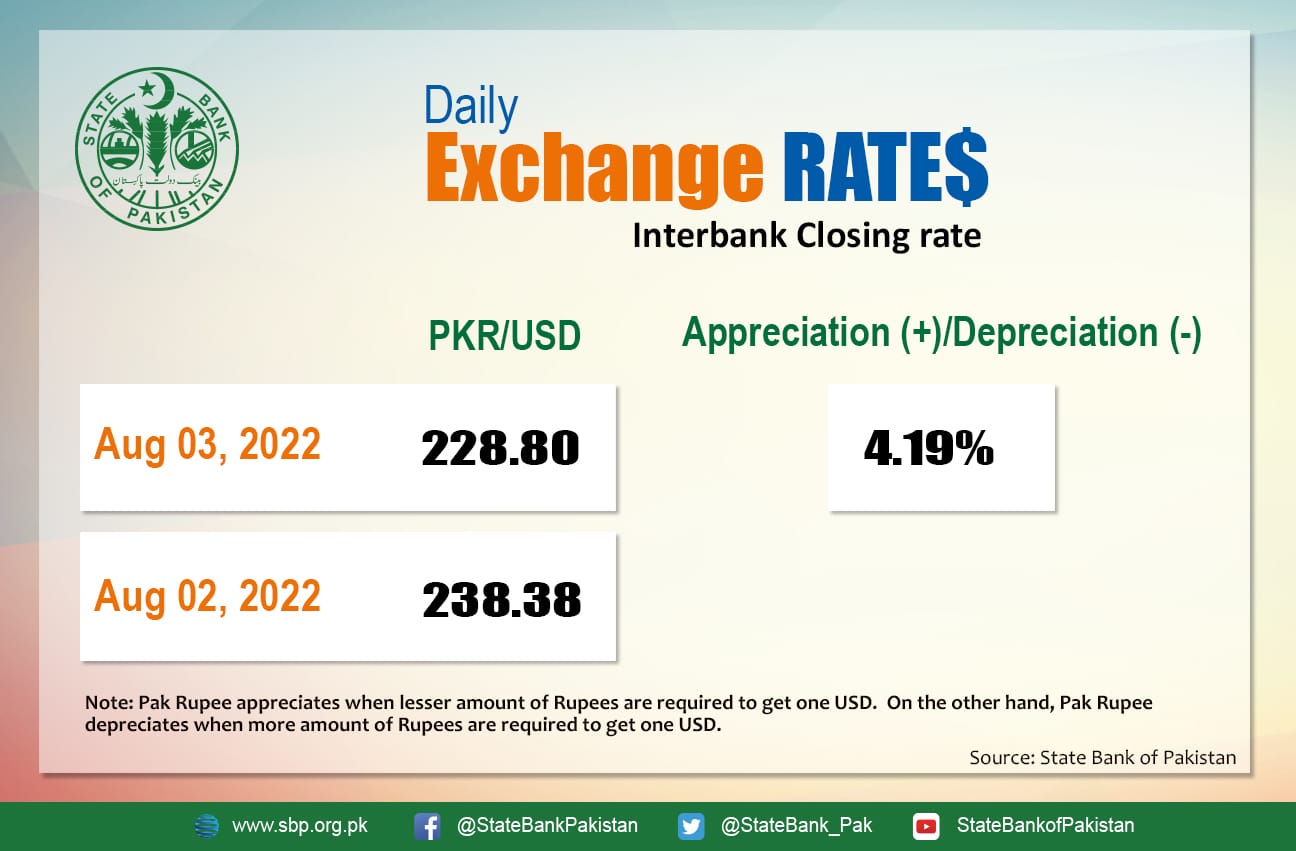 ALSO READ
Market On Steriods: PKR Gains a Whopping Rs. 10 Against US Dollar in Intraday Trade

The rupee closed in the green for the fourth consecutive day on Wednesday. Bulls took control of the currency after the International Monetary Fund (MF) on Tuesday confirmed that Pakistan has fulfilled the last of the prior actions required by the lender for the approval of the combined 7th and 8th review program.

Experts suggest this upward trend may continue in the following days, as government steps to limit bill imports have resulted in confidence. This month, the rupee may rise to as high as Rs. 210 against the top foreign currency.

Resultantly, today’s massive appreciation comes after the country reported a $3 billion deficit in imports which also pumped markets. Pakistan’s imports declined by 38.31 percent to $4.861 billion in July 2022 on a month-on-month (MoM) basis against $7.880 billion in June 2022. While the export numbers are concerning for an already beaten economy, Pakistan’s import bill reduction is in line with market projections of a more than $2 billion decrease in goods imported from overseas channels.

Globally, oil prices fell on Wednesday with Brent crude falling below $100 for the second time since 25 July ahead of a meeting of the Organization of the Petroleum Exporting Countries (OPEC+) members, when producers are anticipated to maintain output while limiting spare capacity, and amid concerns that a slowdown in global growth could reduce fuel consumption.

The PKR reported massive gains against the other major currencies in the interbank market today. It gained Rs. 2.58 against the Saudi Riyal (SAR), Rs. 2.61 against UAE Dirham (AED), Rs. 6.44 against the Australian Dollar (AUD), Rs. 7.37 against the Canadian Dollar (CAD), and Rs. 11.94 against the Pound Sterling (GBP). 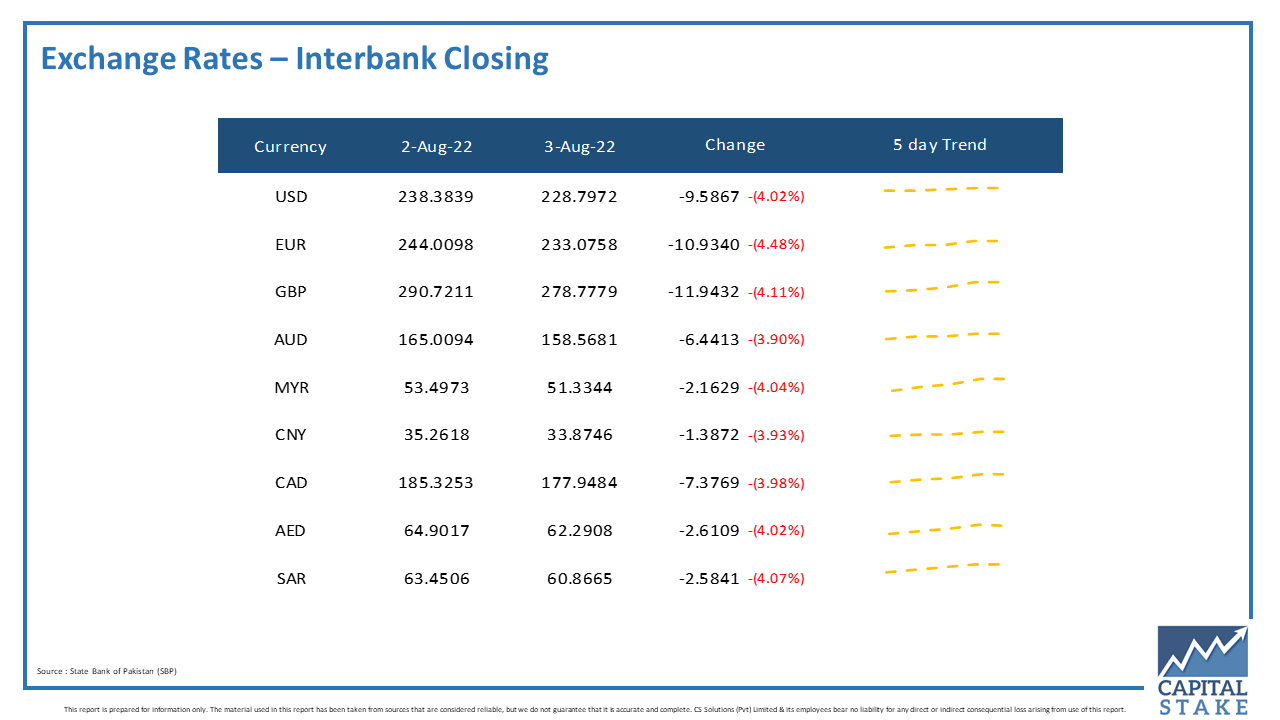 Moreover, it gained Rs. 10.93 against the Euro (EUR) in today’s interbank currency market.