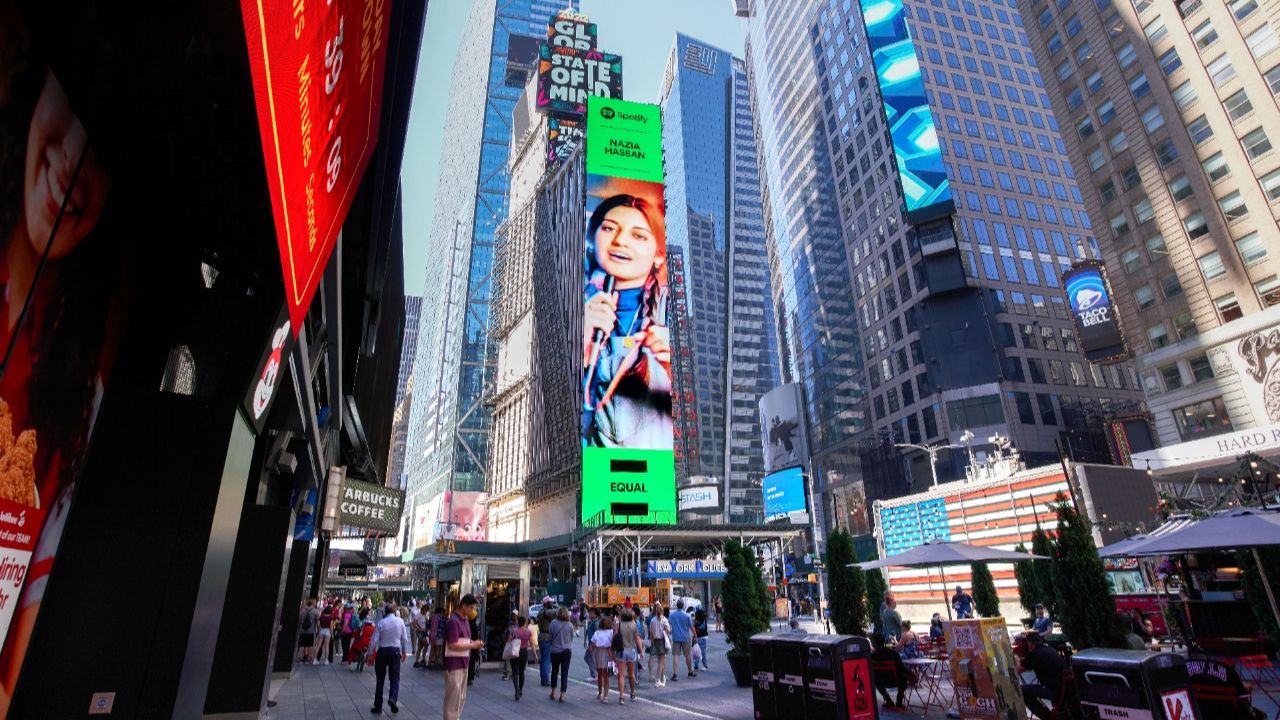 Remembered as one of the most influential singers in the sub-continent and referred to as “The Queen of South Asian Pop” by her fans, Nazia Hassan lit up Spotify’s digital billboard at the iconic Times Square, New York City, as EQUAL Ambassador of the month.

Her ambassadorship and feature on the billboard were timed to coincide with her 22nddeath anniversary as a tribute paid to the pop icon.

Nazia is revered as a legend not just in Pakistan but across the globe for redefining the genre of pop music at a time when it was relatively unexplored. She is amongst a rare league of artists who have etched an irreplaceable mark on people’s hearts.

As her voice and services to society continue to live on, Spotify is celebrating Nazia by featuring her on the cover of Global EQUAL playlist, and highlighting her famous song, Boom Boom, on EQUAL’s global and local playlists.

Sharing his thoughts on this special occasion and remembering Nazia as a woman of substance, her brother Zoheb Hassan said, “My sister always considered herself as a social worker, and not really a musician. She worked with the UN for children and peace in the region, she also did a lot of charitable work as she wanted to help children and young people in need, and she did all of this very quietly.”

She did not share this side of her life with anyone, including her own family. We only found out later after she had passed away. It was her greatness that she never spoke about it. I would like to take the opportunity to thank Spotify for making my dear sister the ambassador for EQUAL Pakistan and Global, representing the female artists of the region,” Zohaib added.

Allanya and Amelia Hassan, nieces of Nazia, also expressed their excitement at this special occasion.

“She’s always been a huge influence on us growing up, we love her music and she was an amazing person. To add to that, she and her music have been a huge motivation to us when it came to writing and singing ourselves and we are so grateful and proud to be a part of this legacy,” they stated.