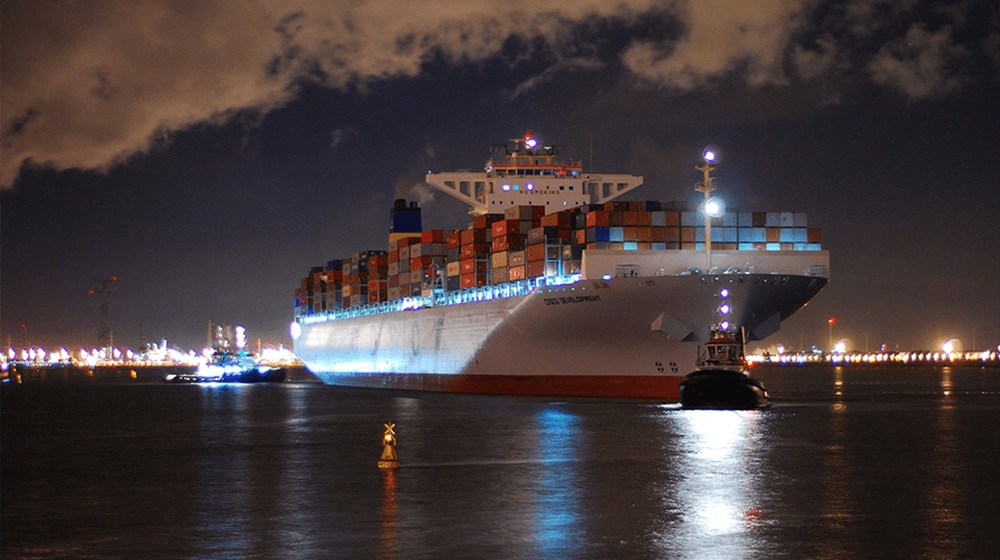 Pakistan’s trade deficit is expected to widen over the next five years with imports expected to exceed exports, fueling uncertainty at a time when markets are already dealing with the fallout from the current political and economic disarray. With concerns about the government budget gap looming, experts believe that increasing exports and broadening the tax net will provide Pakistan with much-needed breathing space. But can Pakistan afford to wait too long before making its next move?

Current trends spell doom and gloom for the economy. The government recently taxed manufacturing industries that contributed zero to exports, as well as other players such as traders and builders. Unfortunately, the devastation caused by the recent floods has dealt a crushing blow to previous policies and left the state machinery in quite a fix.

The International Monetary Fund (IMF) forecasts imports to hit $68.75 billion during the current fiscal year (FY23), while exports will be nearly half of that at $35.90 billion. The lender further predicts this trend to persist for years, with imports expected to clock in at $88 billion versus $44 billion in exports by FY27.

The trade deficit widened to US$48.3 billion despite robust export growth in FY22. Initial IMF estimates suggest it will narrow down to $32.8 billion in the current fiscal year and then surge by 34.3 percent over the next few years to as high as $44.14 billion in FY27. However, bear in mind these projections will most likely skyrocket once the nominal impact of floods is reflected in economic indicators.

This follows the trade deficit jumping 28.89 percent month on month to $3.53 billion in August 2022. Pakistan’s import bill exceeded $6 billion during the period, outpacing the government’s expectations, which had hoped to build on last month’s momentum. Imports increased by 21 percent, or $1.04 billion, in August compared to the previous month. 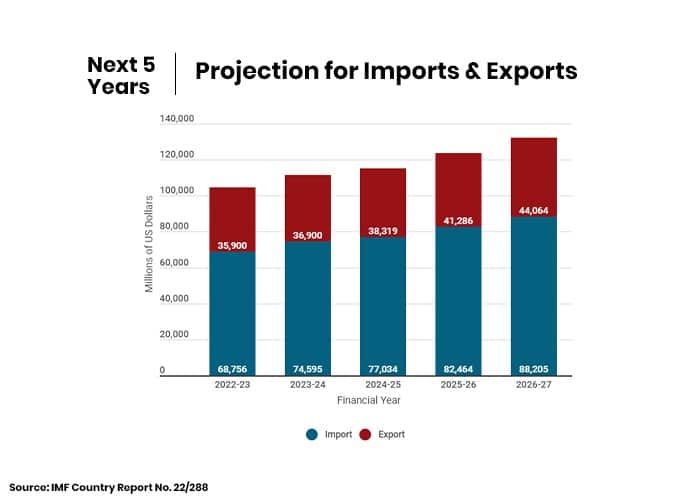 The economy is facing a balance of payment bottleneck as import growth is uncontrollable. In addition, there has been a consistent decline in the prices of the exportable surplus over the years, which has prevented the country from gaining valuable foreign exchange.

So what can Pakistan do to lessen the pain?

The country needs to explore more prospects for the development of investment cooperation in trending sectors in order to survive. While the government earlier restored the imports of various goods and services after a brief ban on luxury items including the imports of major machinery, automobiles, and mobile phones, the overall import bill is likely to come under immense pressure once again as the government prepares itself to procure additional food supplies to offset the impact from floods.

The current trade deficit is not sustainable but given interest rate hikes, PKR depreciation, and moderating commodity prices, it should stabilize. For healthy economic growth, we need exports to grow by 15 percent per year. For that, the focus has to shift to value-adding, IT services, and high-tech industries.

Due to the abrupt changes in governments and over-the-top policy shifts, the country has prematurely deindustrialized, resulting in a loss of share of global exports. The economy is consumer-oriented, and focusing on sectors such as automotive and agriculture would be a giant leap for all players to do business, including the importers.

On the consumer-to-market level of engagement, bank managers are blocking letters of credit (LCs) for small to medium-level traders, impeding foreign currency inflows and undermining trader confidence. It is worth noting that exporters rely heavily on the availability of short and (especially) long-term credit. This is critical for small and medium-sized enterprises (SMEs), where credit constraints are more restrictive than for large corporations.

Because SMEs account for the vast majority of businesses in developing countries such as Pakistan, improvements in this area are critical to promoting export growth. More focused action plans are also required to address specific export potential sectors. According to the Pakistan Business Council, more than 70 percent of export reliance is on traditional products such as textiles, and rice, with textiles accounting for 60 percent of exports, with 68 percent destined for European and American markets.

In order to generate investment, scale, competitiveness, product sophistication, and range/market diversification of exports, a long-term policy owned and regularly monitored by a competent authority is required.

For any government, revenues essentially start from tax collection. Perhaps the biggest component for any government to assess fiscal growth in real-time is by exceeding tax collection with the passage of time. At the moment, current revenue statistics suggest government policies aren’t sufficient enough to help drive positive growth 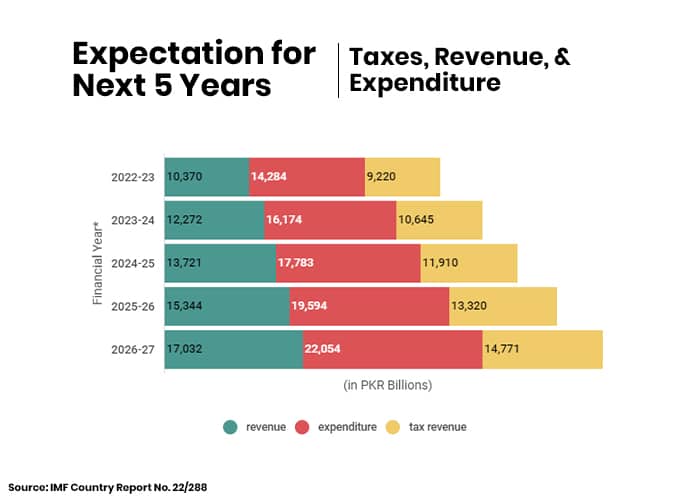 According to IMF projections, the country’s budget deficit (including grants) is estimated at Rs. 3.885 trillion during the fiscal year 2022-2023 (FY23) but these numbers are subject to change after competent authorities realize the impact of recent floods in the coming few months.

Soomro said the tax base is a significant factor in helping the economy grow. He said:

Import substitution has to be the low-hanging fruit for protecting industries in the short to medium term. We need to find new ways to regain competitiveness in areas such as agriculture, dairy, medical services, assembling, etc. The government should only have two targets – export and tax growth, that’s it. 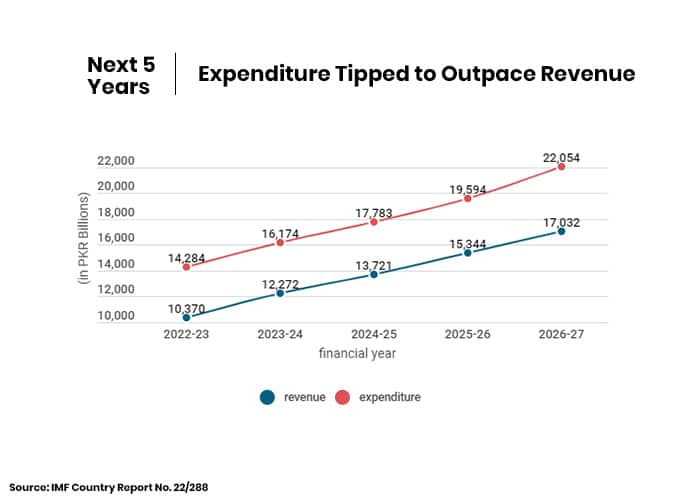 The coalition government has already committed with the IMF to take additional taxation measures of Rs. 180 billion in FY23, including Federal Excise Duty (FED) of Rs. 60 billion on beverages. The authorities also seek to bring the service sector, notably retailers, into the tax net by making better use of data from taxes collected through electricity bills on commercial connections.

Strictly enforced measures to reduce the government’s borrowing needs, export policy restructuring to revamp industry, a proactive monetary policy to bring inflation rates down to more sustainable levels, and strengthening and improving the tax net are suitable policy priorities. If the country succeeds in achieving a trend-setting cycle, the economy can get back its lost share of world exports for the long haul.

Overall, urgent measures necessitate significant effort on the government’s part to honor its commitments and help the country thwart economic ruin in the years to come.

Do you think Pakistan will improve trade relations with partner countries soon? Let us know in the comment section below.