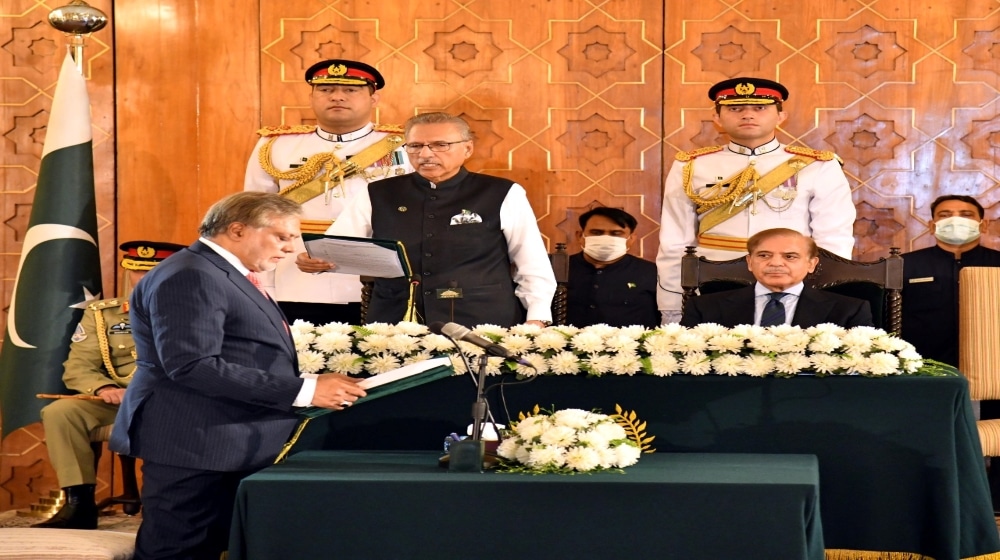 Ishaq Dar took oath as Federal Minister for Finance today (Wednesday), a day after swearing in as senator.

President Ari Alvi administered the oath to Ishaq Dar at a ceremony held at the President Hous. The ceremony was attended by Prime Minster Shahbaz Sharif, senior PML-N leaders, and cabinet members.

Dar has been given the finance ministry as Miftah Ismail resigned from the office. This will be Dar’s fourth stint as finance minister.

The PML-N leader returned to the country on Monday after a five-year self-exile in London.

Finance Minister Dar talking to the media following this swearing-in ceremony said that the GDP stood at 6.3 percent when PML-N left the government.

Dar stated that the hiked interest rates will be need to managed and remarked that the Rupee is currently undervalued and steps will be taken to manage these. Speaking to reporters after taking the oath, he said “We will control inflation and we will bring interest rates down.”

He said that inflation and interest rates have been hiked which has led to the destruction of the Pakistani Rupee. He further remarked that if the PTI did not stage the three sit-ins then the GDP, in PML-N’s tenure, would have stood at 7.5 percent.

He further said that the allegations that dollars were pumped into the market to stabilize the exchange rate are false. Dar questioned that our reserves were dwindling then how could we have pumped dollars? He said that the Rupee has gained traction in the past few days and will continue to gain in the coming days.