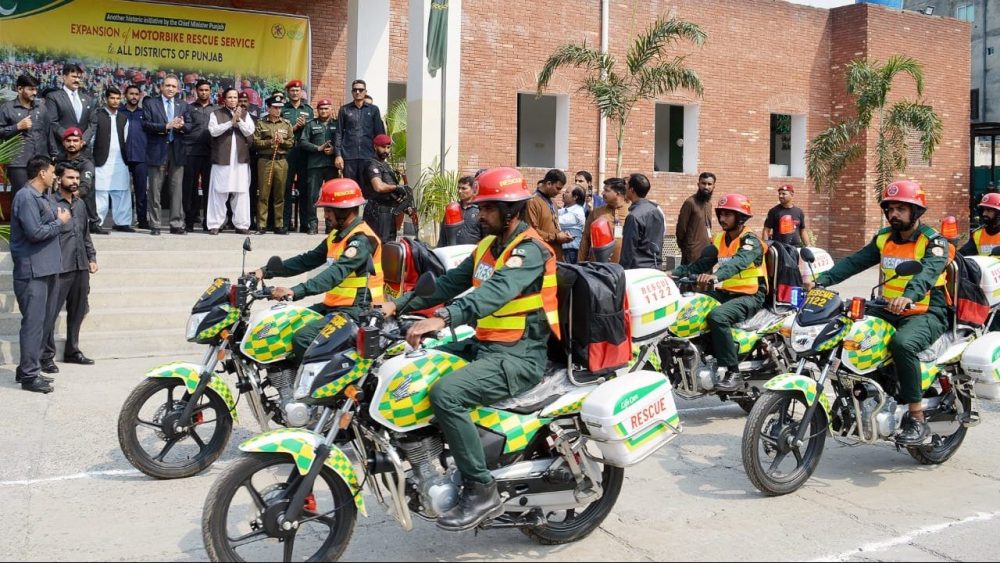 Punjab government has expanded the bike Ambulance service across the province, Punjab Emergency Service Department (PESD) tweeted earlier today. The Motorcycle Rescue Service (MRS) will now operate in all districts across Punjab to facilitate the dwellers of rural areas and densely populated regions.

The Chief Minister Punjab, Chaudhary Pervaiz Elahi inaugurated the expansion of the Motorbike Rescue Service (MRS) to all Districts of Punjab to provide timely emergency services at the doorstep to the citizens of Punjab. @GovtofPunjabPK @Rescue1122Pak @CMPunjabPK pic.twitter.com/9TolIKwDTF

Taking a dig at the coalition government in his latest tweet, Elahi stated that in their 21-year tenure as administrators, the Sharif family could not introduce a single service such as Rescue 1122. “If Shehbaz Sharif can show me a single project like Rescue 1122 during his tenure, I will quit politics,” he added.

Prior to this development, MRS only existed in the main districts such as Lahore and Rawalpindi. The expansion has facilitated the public in terms of both, health and well-being, as well as job creation. The department added that the new service will provide urgent care services to the masses as well.

PESD will provide a new fleet of bikes to each district as per need, with complete technical support. Each bike will have a basic kit for on-spot emergency treatments.

Deputy Commissioner (DC) Umer Iftikhar Sherazi inaugurated the Rescue 1122 motorcycle service in Khanewal yesterday. Addressing the inaugural ceremony, he stated that the administration will initially give 28 motorcycles to Rescue 1122 Khanewal.

He stated that the motorcycle service will help Rescue 1122 respond faster in emergencies. He praised Rescue 1122’s performance in saving people’s lives and property during emergencies. Dr. Muhammad Khalid, District Emergency Officer Rescue 1122, and other officers were also present at the event.