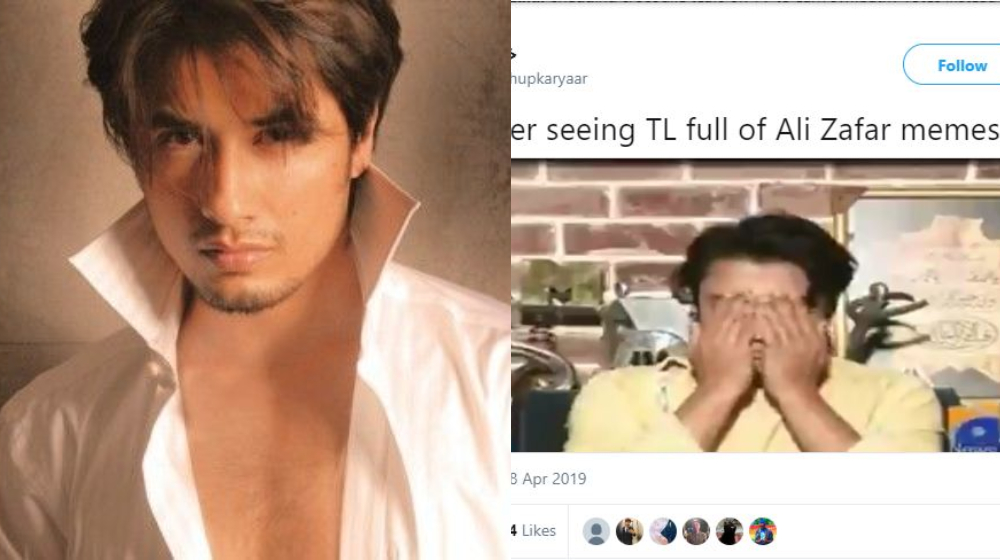 Ali Zafar cried on national television and before we even blinked, it became a meme.

Many people criticized his choice to do so, perhaps as a way to gain sympathy after Meesha Shafi’s case against him was dismissed.

After his court attendance recently, Ali Zafar opened up about the dismissal of Meesha Shafi’s harassment case against him.

The actor-cum-singer teared up on TV, mentioning the sexual harassment allegation that was placed against him in Geo News’ programme Naya Pakistan. Ali Zafar was talking about the defamation lawsuit he filed against Shafi to compensate for the psychological harm and financial losses he incurred due to her accusations.

“I have stayed silent for a year on the topic, whenever an allegation like this is placed on any man or woman, it completely destroys them.”

The Dunya Jhooti singer asserted that if Meesha Shafi takes one step forward in ending the fiasco, he was willing to take ten steps forward.

While progressives appreciate a man getting in touch with his sentimental side and emotional intelligence, that’s not what happened in this case.

Instead, the singer losing control over his emotions on TV has given birth to an onslaught of memes.

We take a look at some of them:

Ali Zafar shedding crocodile tears on TV to earn sympathy votes instead got turned into a meme is the kind of Twitter usage we all need.

Ali zafar crying on TV is so embarrassing lmao I'm so done with harassers who try to use mental health to gain sympathy. like maybe you shouldn't have been a fucking chutiya in the first place. just a thought

Did #AliZafar just cry on national tv? I LOVE IT WHEN WOMEN REDUCE MEN TO TEARS😂😭 Even though they might be fake, ya know.

Some folks say he didn’t even do that great of a job.

Some serious points were raised too in good humor.

Ali Zafar crying on TV today reminded me so painly of the Kavanaugh hearings.

Male privilege and entitlement is universal it seems and so are the methods to invalidate their victims.

Some people did sympathize with the Teefa in Trouble star, crying not crocodile tears.

People brought up this isn’t the first time Ali has done so.