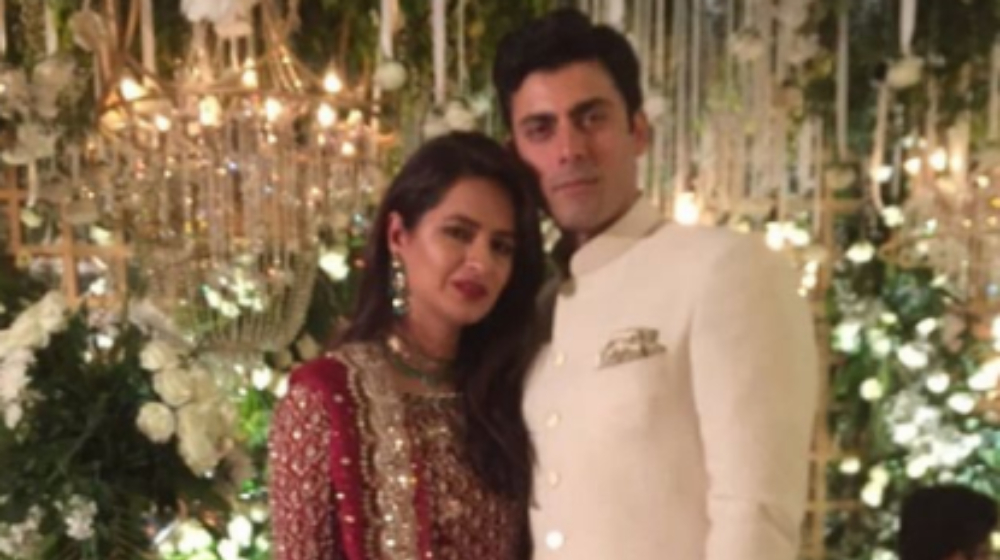 Fawad Khan fixing wife Sadaf Fawad Khan’s hair has us gushing. Its the cutest thing ever, plus it serves as a lesson for macho guys to get in touch with their feminine side.

Over the weekend, a photographer captured this candid moment. The two were prepping to take a photograph at Fawad Khan’s sister’s wedding.

Fans were immediately overflowing with admiration when the video was posted. 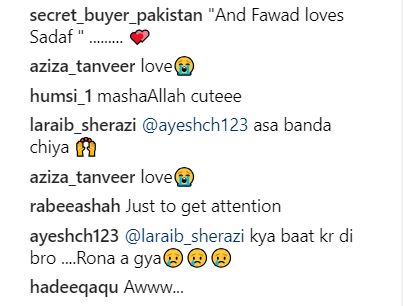 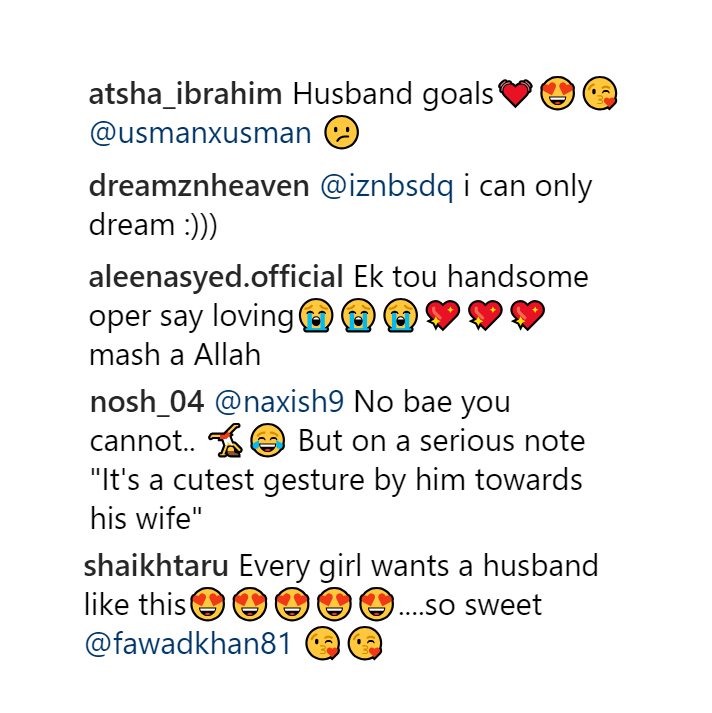 Socialite Shahbaz Taseer posted about how he’s proud that this megastar fights that Playboy image associated with movie stars and shows them how real men roll. That’s leading through example aye.

“He promotes the image of a young secure educated male who respects women and leads by example. I like him, he’s a breath of fresh air for all the guys fighting to keep it hardcore.”

It’s refreshing to have men like @_fawadakhan_ who fight this image and don’t take pride in it. He promotes the image of a young secure educated male who respects women and leads by example. I like him, he’s a breath of fresh air for all the guys fighting to keep it hardcore

Shahbaz Taseer used this cute moment to open up the topic of toxic masculinity. How men who sensitivity and kindness towards women, particularly their wives are shamed for it.

“I grew up in a generation where young boys were made to think that part of being a man was being a playboy.” 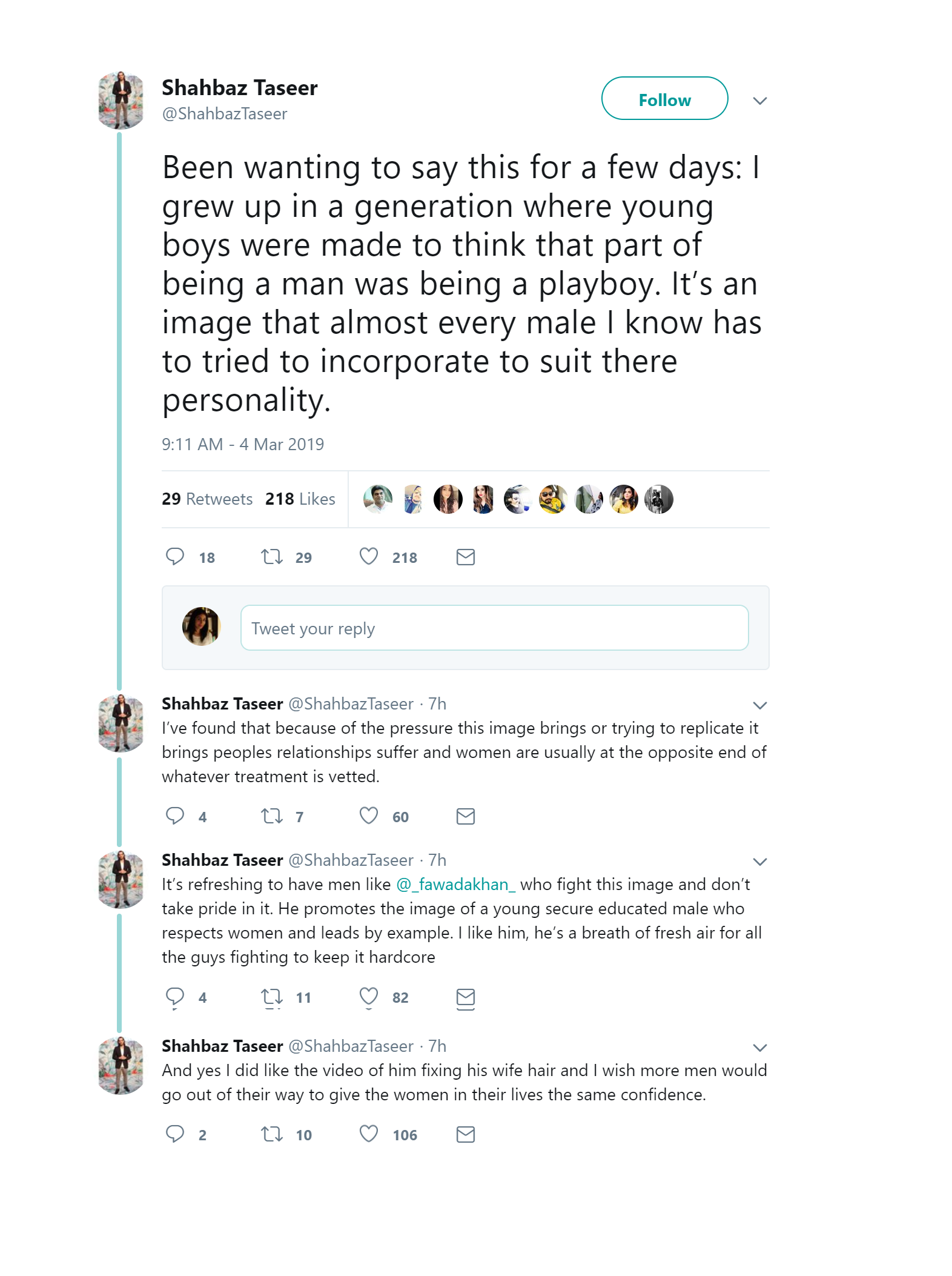 Artist Adnan Malik pitched in and said that men need to stop being detached from their feelings. The lack of compassion and emotion is where this toxicity comes from. The Cake actor explained that aggression towards women comes when some men are not able to achieve unrealistic ‘masculine’ ideals, and be ‘man enough’.

“Aggression towards women is often a result of pent up frustration because we can’t cry, be emotional, or be ‘man enough’……Men struggle with ‘male identity’ because of these unrealistic (and frankly misogynistic) archetypes.”

I think if men cultivated their sensitivity more & practiced compassion towards other men, there would be a wholesale change in society. Aggression towards women is often a result of pent up frustration because we can’t cry, be emotional, or be ‘man enough’

Adnan then said that while ‘unlearning behavior that constitutes toxic masculinity’ is hard, we’ve made progress. Men now feel confident being who they are. Adnan certainly is an actor whose not afraid to embrace sensitivity.

“I now see men who are confident in their masculinity by owning sensitivity.”

Here’s the Real Truth Behind Fawad Khan’s “Refusal” to Vaccinate His Daughter!

The bar for men being sensitive and compassionate is pretty low. Comedian Moroo was praised just for marrying a woman that was not ‘fair as snow-white’. Just accepting that brown women are, well brown is an achievement?

Very few men even understand that humanism comes first, something that designers like Kamiar Rokhni should learn as well. Embracing your sensitive side is no crime.