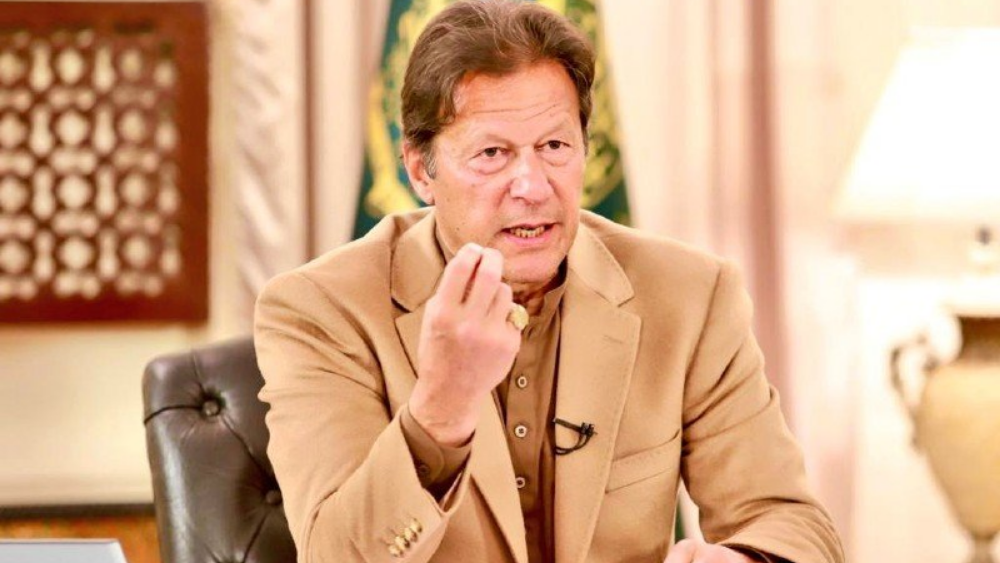 Once again Pakistani Prime Minister Imran Khan is in hot waters over blaming anyone and everyone but the rapist for sexual violence. Desi Twitter just had about enough of him.

In his recent interview with Jonathan Swan when asked about his previous comments that led to him being seen as a ‘rape apologist’, rather than make amends Imran Khan went ahead and reiterated the need to prevent ‘temptation’ all over again.

“If a woman is wearing very few clothes it will have an impact on men, unless they’re robots. I mean it’s common sense.”

Anchorperson: You were accused of rape victim blaming, how do you respond to that?

PM Imran Khan: It is #SuchNonsense

Even the interviewer Jonathan Swan was taken aback saying;

“Is that really going to provoke sexual violence!?”

And Imran Khan responded in the affirmative.

In no time Twitter had to step in and school the PM. Regardless of him being a rape apologist who is into victim-blaming, the reality is the women that fall victim to rape crimes in your country weren’t scantily clad as he believes.

Just saw your interview, PM. Appalled by your views on crimes against women. Women are NOT responsible for their own rape, sexual harassment. Out of control men are. It is that simple. Ask your police to give you stats on how many women who were violated wore 'too few' clothes.

The reality checks were brutal and Netizens did not hold back pointing out case after case that had nothing to do with clothes. Rape is about power and control. In a society where women are even stripped of the right to self-determination, crimes against them will be prevalent. Many research studies have made it clear;

“Sexual violence is likely to occur more commonly in cultures that foster beliefs of perceived male superiority and social and cultural inferiority of women.”

Only 3 days after a child was raped by a cleric, Imran Khan chooses to blame "few clothes" worn by women for rape culture.

Its not a slip of tongue. Such victim blaming is a consistent position held by IK since the motorway incident last year. Our PM is a rape apologist.

What dress code would @ImranKhanPTI recommend for men and children including babies to prevent them from getting raped? Just want to know since sexual assault is APPARENTLY your dress's fault and not at all the rapist's🤡

People even helped Imran Khan recall his playboy past and how he’s in no position to preach. So how did the PM manage to exercise self-restraint back then?

"If a woman is wearing v few clothes, it will have an impact on the men, unless they're robots" PM Imran Khan pic.twitter.com/pkrqN2VbYa

Yet again Twitter had to call out how we must never make excuses for crime, rather enforce the law.

If I rob a bank, its the banks fault for flaunting that it had money. Amirite? @ImranKhanPTI

but punishment for theft is the amputation of a hand

A comedian even had to call out how the PM literally just said;

“This cultural imperialism (not victim-blaming and holding rapists accountable), whatever is in our culture, must be acceptable to everyone else, it’s not.”

Well, then it’s high time culture evolved because clearly, something is wrong. People had to spell out how that’s a threat to women and their security in Pakistan. And basically defending ‘the right to rape’.

Imran Khan’s words are not a slip of a tongue or an ‘opinion by an uncle in a drawing room’. It is a public, dangerous threat to the women of our country where they are informed that rape and assault is their own fault. And that their own PM stands with rapists.

Exactly. When they blame everything on women's clothing, they're actually defending their right to rape. https://t.co/jh1SPASJHn

WHY is Imran Khan justifying rapists. Like what is even his motivation here. What the fuck

Even Pakistan Tehreek-e-Insaf (PTI) supporters couldn’t defend the PM over that.

it isn’t complicated and you don’t need to be a feminist or a gender studies PhD to understand it.

what does the argument that rape is a product of the rapists’ environment show?

it shows an intent to absolve rapists of the responsibility for their actions.

Men are not “robots”, he says. If they see women in skimpy clothes, they will get “tempted” and some will resort to rape

Why you do this #ImranKhan ? pic.twitter.com/5ey67OjSEU

Me after happily tweeting about PM Imran Khan saying #AbsolutelyNot to Americans only to find out later in the same interview him blaming women for not wearing enough clothes. pic.twitter.com/4ugPt4SU2J

In light of all the research available on what causes the prevalence of rape culture, what do you have to say? Let us know in the comments below.