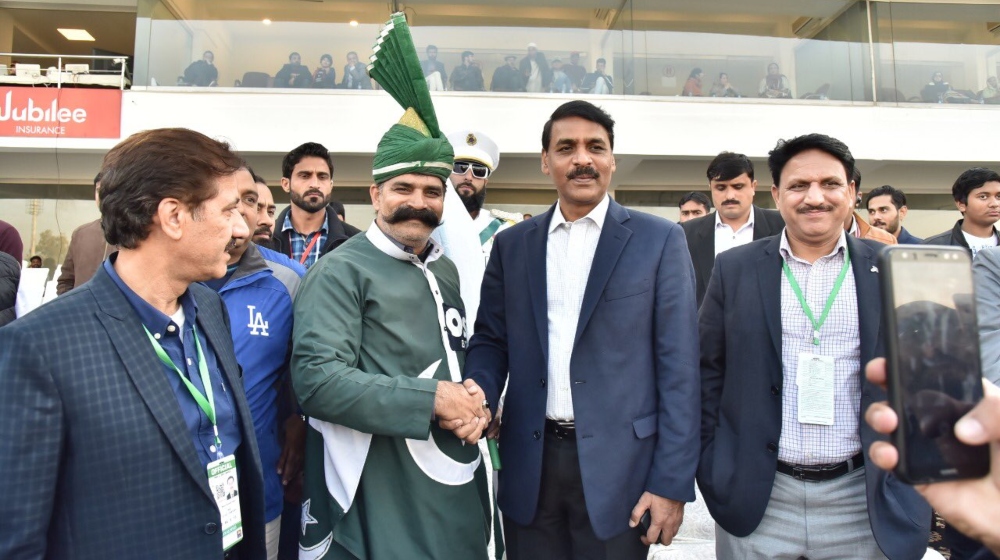 Like most people, Director General of Inter-Services Public Relations ( DG ISPR) Major General Asif Ghafoor was at Rawalpindi Stadium to watch the PAK vs SRI Test Match. Some people pointed out why was a convicted rapist like ‘Chacha T20’ or Mehar Muhammad Zaman there.

Yesterday, the DG ISPR showed up for the match and it became a meet and greet with the General. People gathered to take pictures with the military spokesperson. There were some famous faces in the crowd too.

Someone else caught the spotlight, and it was none other than Mehar Muhammad Zaman. The man was famed for showing at every game when the ‘Boys in Green’ took the field. He was quite the celebrity until he was accused of sexually abusing his own daughters. Later the accusations were proven and Chacha T20 even confessed to his crime.

It’s appalling how a man who is a threat to his own children is allowed to roam freely, even more so that he’s allowed to be the mascot of Pakistani cricket. To be honest, the organizers are to blame here. They need to have a proper vetting system in place.

Of course, some cricket fans are having none of it.

People are not accepting Chacha T20 as a national cricket mascot. A proven rapist and pedophile will not do any favors to the national image. Some fans have demanded that Pakistan Cricket Board should ban the convict’s entry in cricket arenas.

As we've seen our judicial system is absolute trash and rapists and murderers walk free very easily. Maybe @TheRealPCB need to step up and start banning him from stadiums.

Maybe the authorities ought to be vigilant as well:

DG sb you shouldn't have posed for pic with this incest, he's been alleged to rape his daughters

Since DG ISPR was there, some people called for the military spokesperson to take action.

If he is the same @OfficialDGISPR should bring to office and slap him .

Then hang him …. Please.

Disgusting to read… Can this please be confirmed @ZaraHatKay_Dawn @ZarrarKhuhro