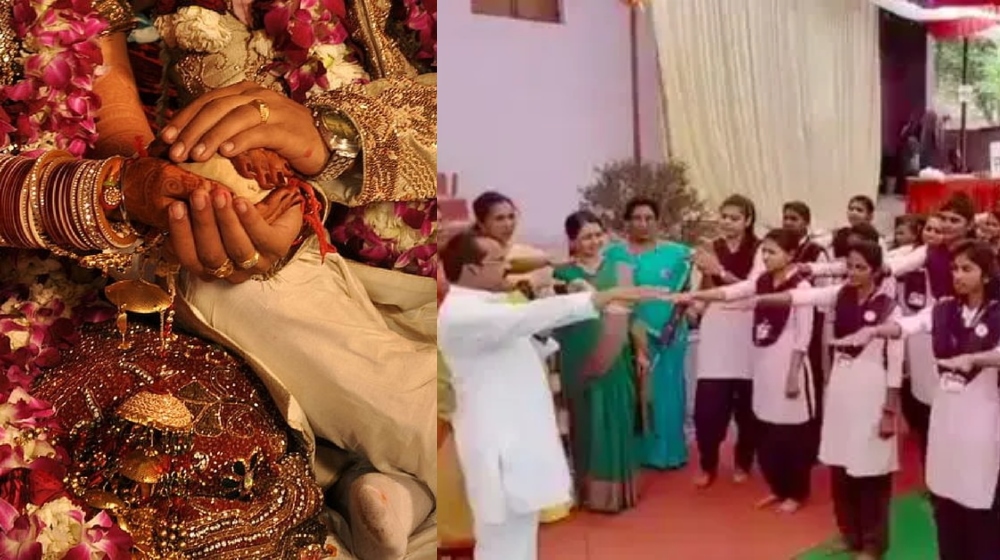 As the world celebrated love and the right to chose your love on the Valentine’s Day weekend, college girls in India were made to renounce their right to a free-will marriage, AKA love marriage, as it’s called in South Asia.

40 women, all students of a women’s college in India pledged to not exercise ‘love marriage’, and against giving or receiving dowry. Soon enough the bizarre news landed online.

The oath was administered by teachers at the Mahila Kala Vanijya Mahavidyalaya in Chandur Railway town during a National Service Scheme (NSS) camp. According to the principal of the women’s college, Rajendra Havre, around 40 out of the 100 girls participating in the camp took the oath.

Indian Express reports that the women’s college in question is run by an educational organization founded by a late Congress leader and former state Education Minister. It offers undergraduate and postgraduate courses in arts and commerce.

The oath administered to the students was;

“I take the oath that I have complete faith in my parents. So, considering the incidents happening around, I will not get entangled in love and will not do love marriage. Also, I wouldn’t marry anyone demanding dowry. If my parents marry me off by giving dowry due to some social compulsions, as a future mother, I will not take dowry from the parents of my would-be daughter-in-law and will not give dowry for my daughter’s marriage. I am taking this oath for a strong and healthy India.”

The pledge is the brainchild of a professor of Political Science at the women’s college. Pradeep Dande. He rationale against love marriage is to curb violence against women.

“The idea of administering such an oath came to my mind during a discussion with women at the camp on ‘Challenges before youths’. It led to the subject of crimes against women. We have witnessed several such crimes…The abiding question is why is this happening? Can we not do something to end it? During the discussion, I asked the girls why they get tempted towards love marriage? Why do girls run away? Have they lost faith in their parents? The idea of oath struck me during the discussion.”

When asked if taking the oath was compulsory, Pradeep Dande said;

“No. It was optional. We had no intention to impose it on them. So the girls who agreed took the oath while others stayed out.”

Meanwhile there was also mention of promoting arranged marriages to ensure no intermixing between casts.

Netizens called out this might as well be a call for intolerance and discrimination.

A School In Amravati or somewhere
Made their students take pledge on valentine's day that they won't go against their caste or religion and do love marriage instead of teaching them to respect every religion & love them.
Are we really living in the 21st century??#Discrimination

Hindu men here acting so righteous like Hindus never oppress women. Chill the f**k out. You are no better than Muslims. Asking women to pledge against love marriage, checking there underwear in Temple. And this👇. You know, cover in colour is still cover. pic.twitter.com/IRRcjW2c7q

Amravati to Bhuj is over 1000 km apart. Yet, these places got so much in common when it comes to exploitation of girls. In a college in Amravati, girls were made to take pledge against love marriage. In Bhuj, girls were stripped to their underwear to segregate menstruating girls.

Speaking of an intolerance for love, Pakistan faced a similar the situation with Faisalabad University celebrating ‘Sisters Day’ on February 14th.

College girls in Andhra Pardesh taking a pledge never to fall in love or go for love marriage on Valentine’s Day as it is against our culture. Meanwhile majority of girls in Pakistan are celebrating “ Haya Day”and “Hijab Day”. pic.twitter.com/dd7D79eXAV

Valentine’s Day is No Longer Banned in Pakistan