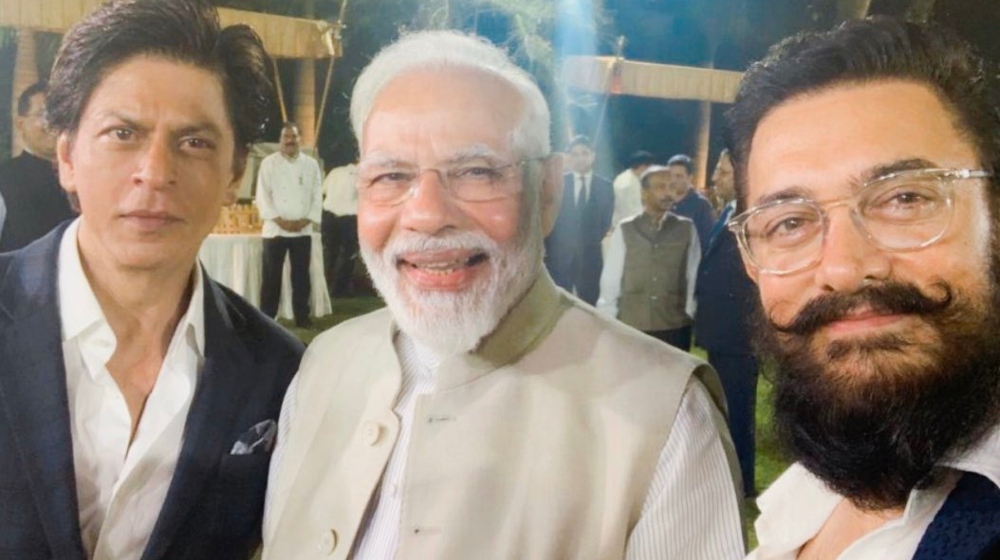 Sometimes you aint got a choice. Like Shahrukh Khan and Aamir Khan’s meeting and supporting Indian Prime Minister Narendra Modi recently. Many tweeps, especially in Pakistan, are still calling them out for meeting the Butcher of Gujrat.

Previously Bollywood’s House of Khans was criticized for staying silent on the reigning Bhartiya Janata Party’s (BJP) divisive brand of ethno-politics. Now they’re being lambasted for coming out in support of BJP and it’s ruling Premier Narendra Modi.

Thank u @narendramodi for hosting us & having such an open discussion on #ChangeWithin & the role artistes can play in spreading awareness of the msgs of The Mahatma. Also the idea of a University of Cinema is extremely opportune! pic.twitter.com/kWRbNk3xzo

The Bollywood celebrities were no alone in supporting Prime Minister Narendra Modi’s latest initiative centered on film and soft power called ‘Change Within’. The project aims to produce film and television shows that popularize Mahatma Gandhi and his ideologies.

Much like when Priyanka Chopra condoned the Indian lockdown in Kashmir, netizens are outraged over the Bollywood openly supporting an oppressor like Modi.

Will those who went for Priyanka with pitchforks for tweeting Jai Hind and not actively coming out in support of the Kashmiris also get as agitated by these two?

To be fair, they don’t have a choice

Plenty of Twitterati understand that during a time when Indians are being canceled over ‘anti-nationalist’ allegations, Shahrukh Khan and Aamir Khan don’t have much of a choice but to play along.

While both Shahrukh Khan and Aamir Khan have stayed silent on Indian politics for the longest time, why come out in support now? The answer is right there in the question:

But last heard, Aamir Khan had security concerns living in India, no? What changed? https://t.co/hZWicGb6kS

Recently he had to cancel a soundtrack with Mika Singh.

Shahrukh Khan and Aamir Khan also faced a fair deal of backlash whenever they tried to raise their voice against the BJP regime.

The same SRK and Aamir Khan who were abused and asked to go to Pakistan not too long ago have now become 'the pride of India' for the RW.

It seems like there is a gun pointing their way. They don't seem too keen!!

I have scoffed at, condescended to, and lectured people for so much as uttering a word about Bollywood. It is low art. It is an assault on one's intelligence and refinement.

It is also a vehicle for India's colonial project in Kashmir, its rabid jingoism, and Hindutva fascism. pic.twitter.com/BDTzokNDGs

With his government’s imposed lockdown in Indian Occupied Kashmir after stripping the territory’s autonomy, they’ll need more than ‘Change Within’ for rapport.

Recently many influential Bollywood celebrities have been seen interacting with Modi and endorsing his newly launched project. Previously it had been revealed that Bollywood celebs promote political propaganda in exchange for money.