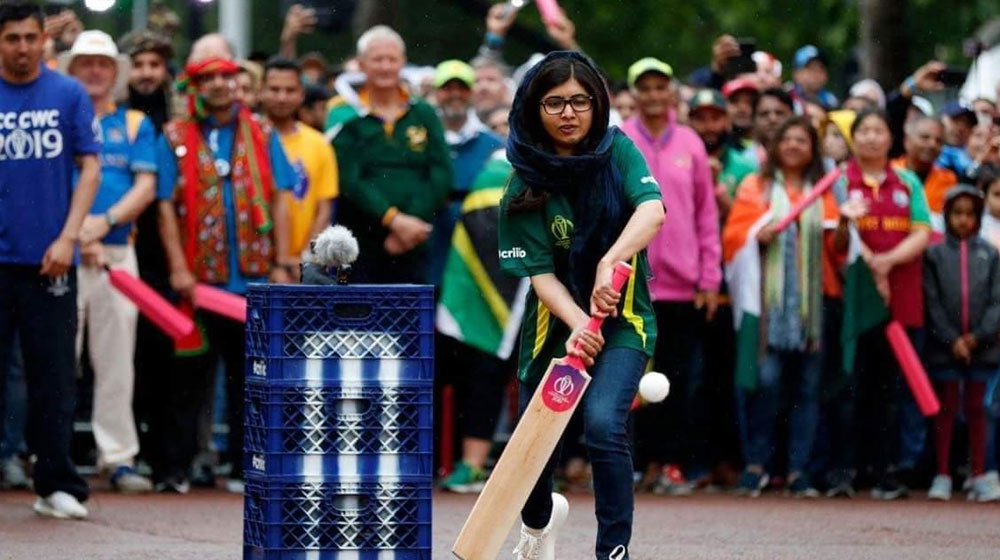 The world-renowned social activist and celebrity is known for her friendly and peace-loving nature. But that doesn’t mean she can’t crack a joke or two against our rivals India, just in time for the upcoming Pak-India clash in the Cricket World Cup.

Her friendly jibe at the Indian cricket team during the star-studded opening ceremony of ICC Cricket World Cup, 2019 in England, has spread smiles on every Pakistani’s face.

Malala, paired with Test batsman Azhar Ali, who was representing Pakistan in the 60-second batting challenge.

Here’s what happened next:

Cheeky and spot on as always @Malala! How I love this girl👌😂

"Pakistan we were ok, not too bad-came No 7 but India came last so I think for Pakistan that's what….but India played really well"
🏏#WorldCup2019 #Pakistan #CWC19 #WeHaveWeWill pic.twitter.com/BuP465pSSv

The format of the game allowed both players of a team to take turns simultaneously for one minute and to score maximum runs in the given time. The team with the highest score was to be the winner.

At the end of the segment, Malala was asked to comment on her team’s performance – which stood at 7th in ICC’s official rankings.

“Pakistan, we were okay, not too bad. We came seventh. So what?  India came last.”

Well her attempt at some light-hearted comedy certainly worked, as the crowd broke into laughter after her comment.

But of course, this didn’t go down too well with some Indian fans, who started bashing her on social media for this ‘derogatory comment.’

You praise Pakistan, a nation where you can't go.
You demean India like a typical brainwashed Pakistani, yet India is a nation which you can safely visit.
Stop being petty and disgusting @Malala. pic.twitter.com/MGugFTKCfV

You cheer for the country from which you fled, which you are afraid to stay even now and you demean India which holds a 6-0 Record in real WC encounters. Lady, the game is on 16th and we Indians will have a smile then. This is what happens when fame gets into one's head.@Malala pic.twitter.com/upIQhj5xX3

Based on these comments, its safe to say some Indians have no chill. If they certainly can’t differentiate between a playful comment and some legitimate criticism, they need to get their heads examined.

On the other hand, Pakistan vs India matches are a whole different level of sporting rivalry. Expecting people from other sides of the border to watch this high-octane clash with absolute peace is asking for the moon.

At least Malala has ignited some friendly banter between the two cricket rivals. Like her, we can’t wait for the big game.