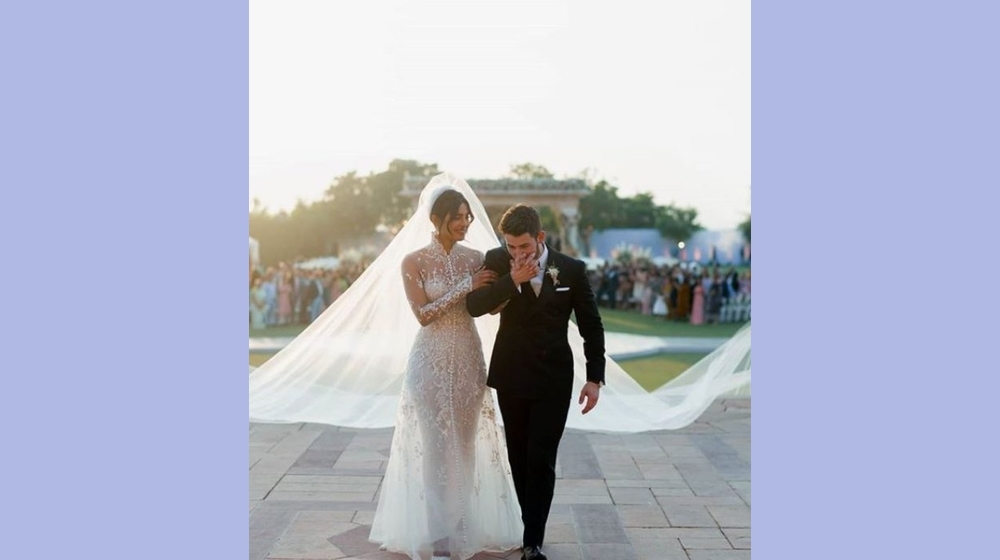 While we Eastern folk have a notion that the wedding day is the bride’s day, Nick Jonas had a different idea for his.

Priyanka wasn’t the only one with sentiments stitched into her wedding dress, as Nick too had a customized message stitched into his wedding tuxedo. And in Urdu!

No doubt Priyanka Chopra looked stunning in her Ralph Lauren wedding gown and the fact that it had sentimental artifacts added, just adds to the allure.

As far as I can recall, this trend of celebrities stitching messages in their clothes started at Brangelia’s wedding in recent history. Jolie’s veil featured her children’s doodles, while Deepika stole the spotlight for sentimental wedding pieces with the prayer she had stitched into her wedding dress.

Priyanka went a step further and had lace from a wedding dress, which belonged to her mother-in-law Denise Jonas, sewn into her gown. She also had the names of her husband and her parents names Madhu and Ashok stiched into her wedding gown.

The Quantico actress also had theses names stitched in Hindi into her Sabyasachi red lehenga.

Meanwhile Nick went with neither English nor Hindi but Urdu for his message. The Levels singer had ‘My Jaan’ stitched in Urdu into the inside of his Ralph Lauren tuxedo lapel.

The couple also had their outfits made by the same designer. Ralph Lauren had actually approached the pair, Priyanka told a magazine a few months earlier. She mentioned that she wanted him to design her wedding dress because he’d only designed three wedding dresses in the past 50 years, (we all like things that are exclusive).

“Ralph Lauren is so much a part of our love story for obvious reasons. For the Western wedding, we had been talking to a bunch of incredible designers, but ultimately when he approached us, I learned that Ralph has only designed three wedding dresses in 50 years — one for his daughter, his daughter-in-law and his niece. I was blown away.”

The hand-beaded and hand-embroidered dress featured floral and scroll motifs with a lace-effect tulle appliqués. The diaphanous dress was layered with a strapless column dress made up of 2,380,000 mother of pearl sequins underneath. As well as a 75-feet-long veil. The embroidery took a total of 1,826 hours to complete.
For the Hindu rituals the Sabyasachi lehenga, it took 110 embroiderers and 3,720 hours to create the ensemble with hand-cute organza flowers, French knots, and the embroidery.