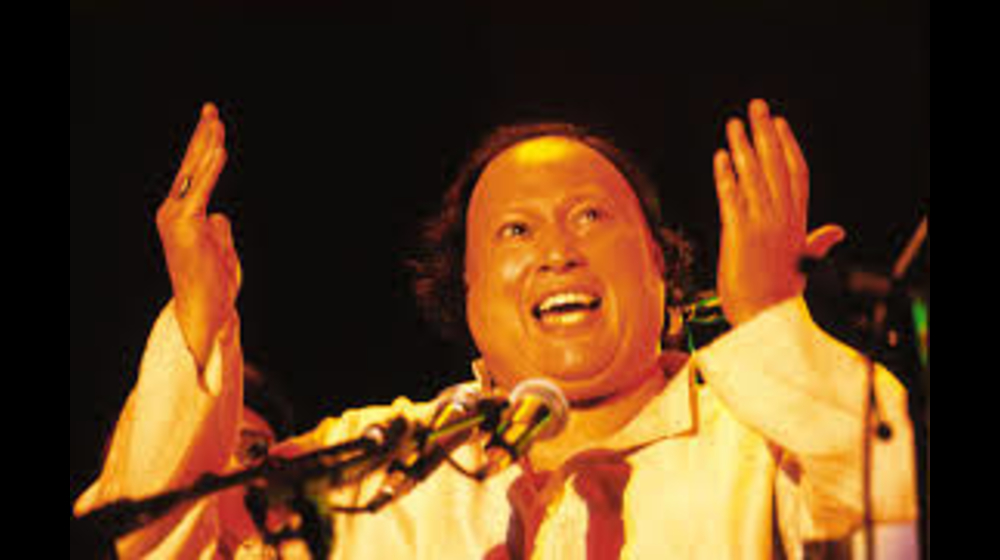 Nusrat Fateh Ali Khan needs no introduction. He’s considered a legend the world over. So much that even music streaming platform Spotify mentions that his Qawalis happen to be the most popular with listeners online.

To celebrate some of the man’s best works, we have listed just 10 out of the numerous musical hits he has given to the world.

The Qawali is about the unconditional love of God despite man’s constant betrayal.

The song is more famous for its romantic undertones. Few delve deep enough to realize that this Qawali is not a love ballad but the story of life’s hardships and the consequent heartbreak from the love of life. In the end the message is to live but not too wholeheartedly.

The reason many of Nusrat Fateh Ali Khan’s songs were turned into Bollywood romantic numbers is due to the fact Sufi music are technically, love songs, albeit ones that are about spiritual love for one’s creator. This 90s song has a similar vibe.

The Bollywood film Dil Lagi made this Qawali famous and then the Pakistani serial starring  Humayun Saeed and Mehwish Hayat revived everyone’s love for this breakup ballad. It may be safe to say that this song is truly about a romantic partnership, with no spiritual connection undertones.

This song is a obviously a spiritual one. The track focuses on the many degrees of apologizing. Maybe that’s were the inspiration for the six degrees of separation came from. Here we see someone seeking the love and forgiveness of God. The track overall has an optimistic approach towards the outcome.

The track is a break-up ballad and quite pessimistic to boot. The track has been remixed and rebooted to produce many covers over the year. None can compete with the original though.

Another track that is a hit in Bollywood. The track does have a more Sufi rendition that’s longer and more emotive but the version most people have heard is the one featured in the film Kartoos starring Manisha Koirala, Jackie Shroff and Sanjay Dutt.

Another Sufi track that can be mistaken for love of the world. Dil Sulagta Raha Chandni Raat Mein is a recurring track on many of Nusrat Fateh Ali Khan’s albums. It was first recorded as part of his Sufiyana Kalam hits album.

This soulful tune is considered one of the best of Nusrat Fateh Ali Khan’s earliest works.

This track is another two-way love song. It is equal parts a story of a struggle to choose between the real and the spiritual world.

We hope you enjoyed these songs by Nusrat Fateh Ali Khan. Which one’s your favorite?