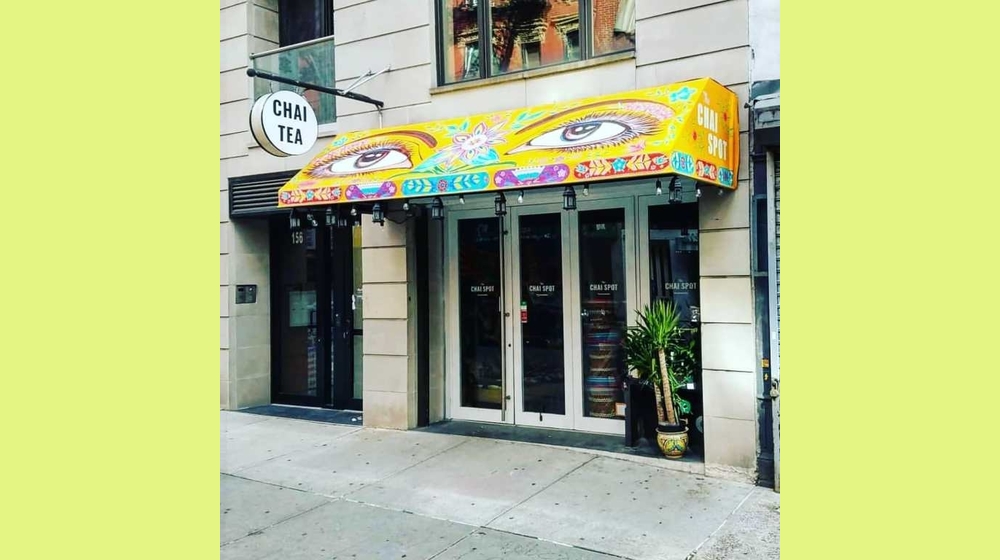 Ask any Pakistani about chai (tea) and chances are that they will say that they can’t live without the piping hot beverage. To bring in a touch of Pakistan anywhere, you just need cups of chai. And one Pakistani American couple is doing just that in New York with ‘Chai Spot’.

Chai is a staple of Pakistani cuisine. No meal or meet up is complete without it. Whether served before or after meals or just on its own, the path to true fulfillment is chai.

Since chai is the ultimate comfort food, in Pakistan we have a chai dhabba around every corner.

Usually, you can find chai along with parathas and other stuff that go with the hot beverage. There are some upscale restaurants with a dhaaba theme that serve an assortment of chai, from a cup of doodh patti to masala chai as well. They try their best to provide a dhabba experience with chai and comfort food.

These chai places aren’t uncommon in Pakistan but one pair took that love to New York and set up a dhabba themed chai place. The pair took the dhabba theme pretty seriously, even adding details such as colorful carpets, pillows, and floor seating. Even the decor incorporates truck art, a tribute to the chai dhabba’s origins. The detail that was a little off was the mason jar-like containers that the chai was served in. Other than that, it captures the essence of upscale chai dhabbas in Pakistan pretty well. The chai cafe also sells trinkets made by artisans in Pakistani villages. Particularly from women in Balochistan and Sindh in order to promote Pakistani culture. This is a good thing as it promotes Pakistan’s soft image abroad.

The Minds Behind Chai Spot

The story of the couple behind this idea is even more heartwarming than chai itself. The founders of Chai Spot, Khalida Brohi and David Barron, first met back in 2014. Given Khalida comes from a Pakistani Balochistan family and David belongs to an Italian-American family things were pretty rough back in 2014.

As it turns out, chai was one of the few things that helped warm up their families to the idea of their union. So the couple is now sharing that love where ever they go. First in Sedona, Arizona and now NYC.