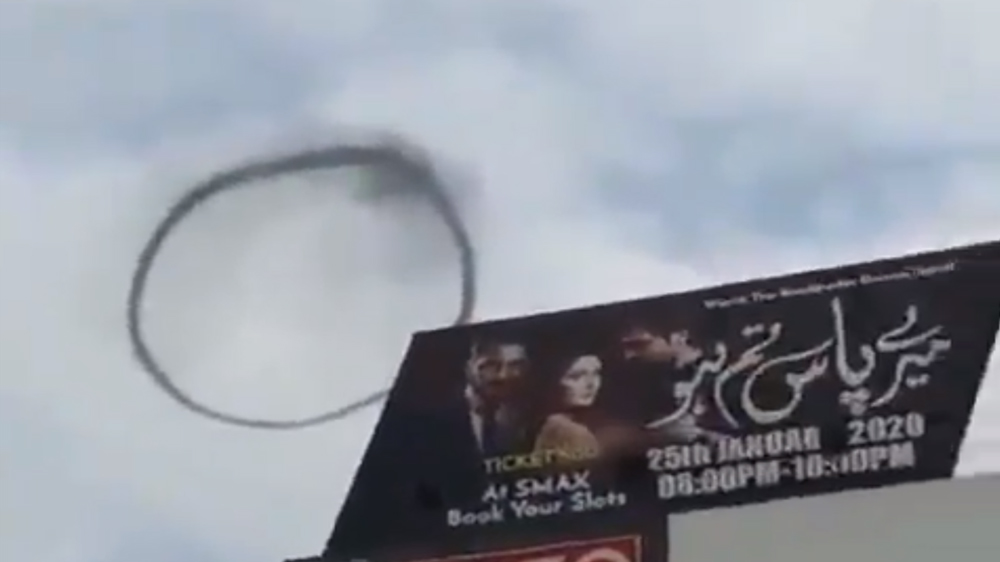 Something very strange is going on in Lahore, and people are saying that those darn Green Martians are finally here. A weird black circle just appeared out of nowhere in the city and now people can’t stop talking about it.

They are here. #Lahore #Aliens pic.twitter.com/OfWPG20Il9

Ironically, this ‘big bad black circle of doom’ was found hovering near a cineplex that will show superhit drama Mere Pass Tum Ho. Is this actually real? Fake? Or just a marketing stunt doing what it’s supposed to?

Impossible! Aliens only land in America.

Well guess what, be it aliens or Mere Pass Tum Ho, people are now talking about both!

What is this phenomenon?

In case you think this phenomenon was the result of aliens finally coming to destroy us all (maybe they didn’t like how Mere Pass Tum Ho turned out from their interplanetary cable service), well you can rest easy.

This black circle in the sky is a rare man-made phenomenon. They are called smoke vortices, formed by blasts through a circular structure (think fireworks, chimneys, industrial-scale furnaces, etc).

There have been repeated sightings of it too all over the world.

Here’s how its formed:

How Does ‘Mere Pass Tum Ho’ figure in this?

Well of course, since this was shared on Pakistani Twitter, people had a lot of fun trolling it. Here are some reactions that tried to make sense of this ‘portal to hell’ with Mere Paas Tum Ho:

We think this one is the perfect reaction to any alien sightings real or otherwise:

The truth is out there (we think). Oh and just in case you are miffed about the drama not coming to TV screens because of its last episode, there’s no need to panic.