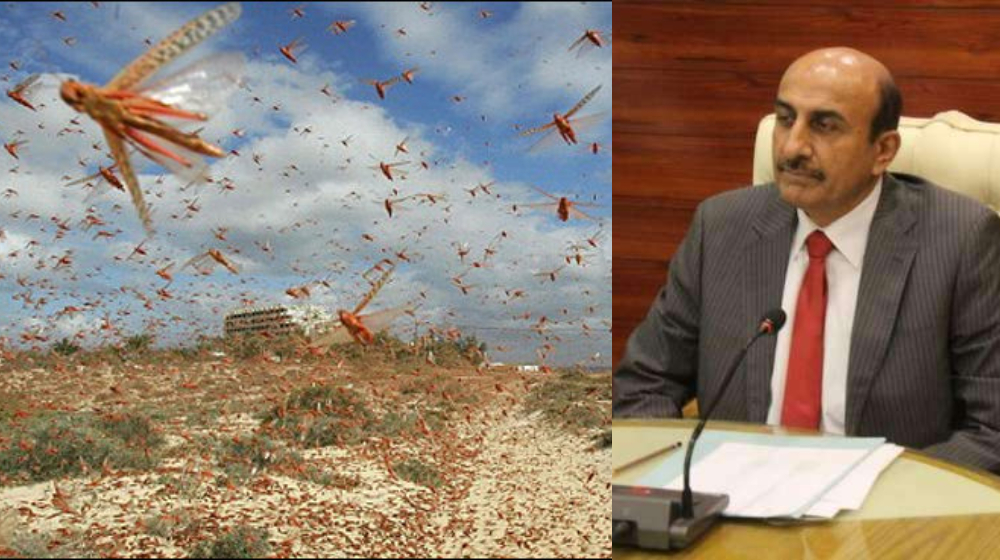 The United Nations warned of a locust outbreak on both sides of the Red Sea. While others scramble to do some damage control, Sindh’s Agriculture Minister Ismail Rahoo suggested that we should just eat them.

A handout issued on Thursday quoted Ismail Rahoo as saying that:

Locusts ‘are as tasty as shrimps’.

While the consumption of insects is not uncommon in Asia, people from the subcontinent are a bit reserved on the matter.

Sindh's agriculture minister has offered a solution as the province faces an attack by a huge locust swarm. He has suggested that the people should eat the locusts; they are as tasty as shrimps.@BBhuttoZardari #fixed

Locust, on the other hand, has been a culinary delicacy in Asia, and in Africa in the past. It was only because of the use of pesticides that led to the species dying down. People stopped eating them in Africa as a result.

Some two decades ago. eating locust was common in Thar. If it comes to it, the protein-rich insect might become part of the daily diet.

Regarding the recent remarks made by the Sindh Agriculture Minister, people think that he was more concerned with mocking his constituents instead of suggesting it as a serious alternative.

Locust attacks have been reported in Khairpur, Sanghar, Nawabshah, Matiari and Jamshoro.

President Zardari spoke about this in his speech, @sakhtarmengal also spoke on locusts in his budget speech. I just held a press conference on devastation caused in Sindh & Balochistan. SOS calls for help from Fed govt fall on deaf ears. Federal Locust control divisions sleeping. https://t.co/fh4qEbZ12N

Sindh’s Agriculture Minister did announce deployment of air and ground pesticide to control the spread of infestation to Sindh’s cotton fields.

The Sindh government wrote to the federal administration and Suparco (Space and Upper Atmosphere Research Commission) to carry out an aerial application of pesticides.

Rahoo demanded that the federal authorities concerned should deploy a special team for the purpose. According to the minister, the Sindh government had deployed field teams and declared emergency wherever the locust attack had occurred.

From Nara Desert Khairpur Mirs to now reached in Agriculture belt of Sanghar, Nawabshah , Matiari, Jamshoro, Dadu Districts. Provincial and federal Govt should take action on urgent basis other wise it may destroy all crops, trees and what green leaves are available @afiasalam

The Sindh government is waiting on the federal government to take action despite the provincial authorities having the autonomy to do so.

The News quoted the provincial minister as saying that the attack on Sindh’s crops was identified in the first week of June.

Meanwhile, president of a local agriculture chamber, Khaskheli told Arab News the threat was identified on May, 25th.

“On 25th May, we spotted the locusts for the first time when they were about 18 km away from irrigated land in Sindh.”