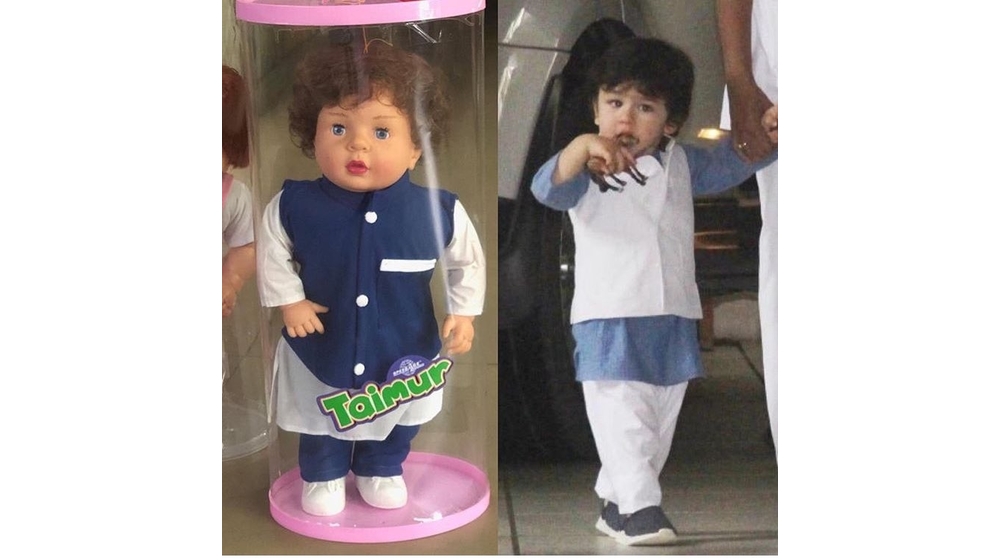 Earlier this year, Bollywood star couple Saif Ali Khan and Kareena Kapoor welcomed a baby boy to their family. The boy, Taimur Ali Khan Pataudi, became a sensation in no time, with his face splattered in a bunch of places from apparel to peoples’ social media feeds. And it seems that there is no stopping the Taimur craze in India, but we think that things have gone too far now.

The latest craze to hit India are dolls that feature the same likeliness as Taimur. One doesn’t need to look hard to see how far the Taimur doll may have taken up fanboyism/ fangirlism to creepyville now.

When an Indian journalist posted a picture of the Taimur doll being sold in Kerala, both the miniature Nawab’s parents had different reactions to the toy.

Meanwhile at a toy store in Kerala… pic.twitter.com/J2Bl9UnPdT

While Saif Ali Khan joked that maybe he should trademark Taimur’s name and the creators of the doll could have sent one to the Nawab household, Kareena was concerned about the whole thing. Apparently Kareena believes that her firstborn should lead as much of a normal life as he can. She said that while she won’t stop the media, she’ll continue to strive for a normal childhood for her little Nawab.

People were pretty blunt in calling out how creepy this doll looks though:

This is also highly disturbing that people would buy a toy that looks like someone’s child and give that to their kids to play with or just buy it and collect it. Next level creepy? I think yes.

He is a child… not a commodity 😕#TaimurDoll #Fb pic.twitter.com/lRvHpPrX21

Our world defies craziness. U do something crazy and there is always someone to top that!!!! Weird AF …

If that’s not creepy I don’t know what is

Some responses called the whole thing straight up absurd:

There were some people who admired this handiwork as well:

Chill guys….people love him….and so they made a doll of him

You know na? This doll pic of #TaimurAliKhan can trend and break the internet? 😃😂 Doll is as adorable as Taimur ❤❤❤ https://t.co/SQsiVfRGfw

😍😍💞💞
If someone spots it, please get one for me☺🙈 #TaimurDoll https://t.co/QWWgXlTP3M

Apparently, there were requests for more of this stuff as well:

What do you think of this whole affair? Should people give Taimur (and his parents) a break?