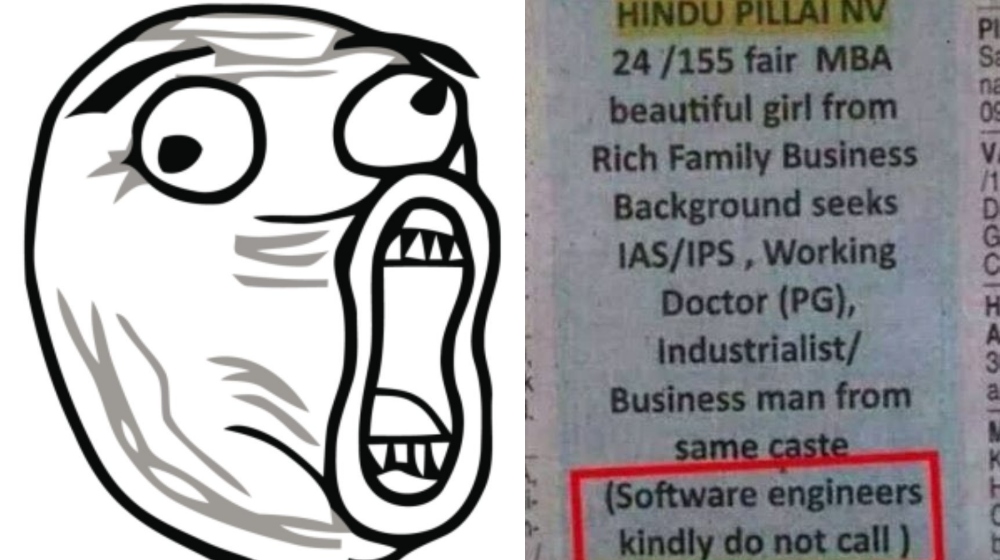 Mail-order spouses are still very much a thing in desi society even in this day and age. So, posting matrimonial ads is still a practice. However, recently as a matrimonial ad landed online and it has become a viral gaffe.

A matrimonial ad in a newspaper went viral in India for its odd preference. A snip of the bizarre newspaper clipping found its way onto Twitter, and Netizens have so much to say.

The ad was posted looking for a groom. As per the printed ad, they require a groom for a 24-year-old girl who is described as ‘fair and beautiful’. Additionally, she has an MBA.

In terms of her family background, the 24-year-old seemingly belongs to a rich family that owns a successful business. So, the groom should be an IAS or IPS officer, a working doctor, an industrialist, or a businessman from the same caste. However, ‘no software engineers’.

Not only does the bride’s family have particular special professional demands but also caste preferences.

Twitter definitely cracked jokes about the ‘no software engineers’ part.

Matrimonial ad asks software engineers to ‘kindly do not call’, future of IT does not look so sound, jokes tech CEO #गोदी_मीडिया_बकवास_बंद_कर #softwareengineering #Trending pic.twitter.com/mYM75Cnk8J

Then there were other memes.

When a matrimonial ad decides to roll-play. pic.twitter.com/oxivposLOi

Still Not Sure, Whether Its a Matrimonial Ad or A Relationship Advice To Girls. pic.twitter.com/131gCEzJhD

Did someone put out a matrimonial ad for me pic.twitter.com/DKsbk0iijT

Guy is saying in his matrimonial ad that he got married once but didn’t get laid. Is this enough details? pic.twitter.com/IXTyE1mzYK

On the other hand, there were people pointing out the very real problems associated with these matrimonial ads and discriminatory demands.

Caste is not dead. Check out the Sunday matrimonial to see for yourself. Please note, all ads are from urban centres.
The only time we think Caste is dead is when it doesn’t affect us directly in anyway. I wasn’t aware of my privilege/reservation issue till after college. pic.twitter.com/LphIvwDKuT

Then there were these people.

I would say “see how women only chose a rich family to get married”.

It’s very easy for feminists to twist narratives if the other side is ignorant. #Matrimony #LFPR

What do you think of this whole ordeal? Let us know in the comments below.