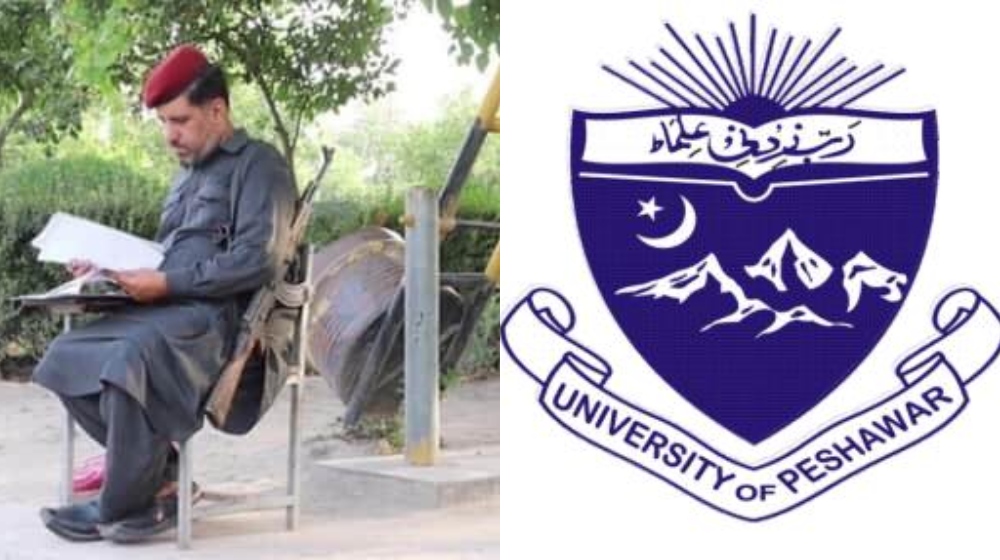 The watchman at the Sheikh Zayed Islamic Center at the University of Peshawar has had an incredible journey in his pursuit of education. This overqualified watchmen recently obtained his M.Phil degree.

Independent Urdu reports that Noor Marjan was appointed watchman after completing his matriculation when he was 20 years old. Now he has an M.Phil in Islamic Studies.

Unfortunately, despite being overqualified, he is still working as a watchman.

Pakistani Kid Succeeds in Teaching English to His School Guard

Hailing from Khyber Pakhtunkhwa’s district Khyber, Noor Marjan dreams of being hired in a position that suits his academic qualification. Yet he’s been stuck as the watchman at the Sheikh Zayed Islamic Center at the University of Peshawar.

Noor originally took on the job to feed his family and fund his education. Despite being overqualified, he hasn’t even been offered a better position at the University of Peshawar where he’s dedicated 20 years of his life.

“Look at my degrees. Was recruited based on my matriculation (qualification). Later I privately attempted my FA/Intermediate and Bachelors in Arts (BA). After that, I secured admission for M.Phil after obtaining my regular Master’s degree and now I have completed my M.Phil from the Peshawar University of Agriculture.”

Coming from a poor family, his job as a watchman was a necessity. Like most people, he pursued higher education to obtain a better job.

“My dream was that after getting higher education, I would lose my job as a watchman and get a better job, but I am still working as a watchman. Sometimes I get very upset that I am on guard duty despite getting my M.Phil degree, but I can’t give it up because if I give up, there is no other source of livelihood and my pension will be lost.”

In fact, when he was offered better positions at the University of Peshawar it was on the same salary as a watchman. Noor Marjan has worked in various departments at the university. In 2014, he was given the responsibility of Superintendent of Examinations, responsibilities he held for four years.

Later he was given the responsibility of a clerk at a university hostel. Now he is serving as a watchman again.

Most people with an MPhil don’t have extensive field experience. They’re valued for their research that comes from all those years of studying.

He was appointed as security guard 20yrs ago on metric qualification, and now has completed his M.phil degree from Agriculture University Peshawar. His research topic was ‘comparative analysis of tribal customs with customs of Hindu and Sikhs 👏👏 pic.twitter.com/FH9pkwX6uu

Noor Marjan’s thesis is nothing short of impressive. His project was ‘Comparative analysis of tribal customs with customs of Hindu and Sikhs‘.

He has demonstrated his research capabilities, and this makes us wonder why won’t the University of Peshawar (or any other) offer him a suitable position and a fair wage.

“My request is that I be given a duty according to my education.”

I know him personally he is very good man. He several times requested the management of Islamic center especially directors to give him official job in order to utilize his education but nobody in the whole center have pity on him.

Let’s do our bit to help this man get his due. He deserves better.