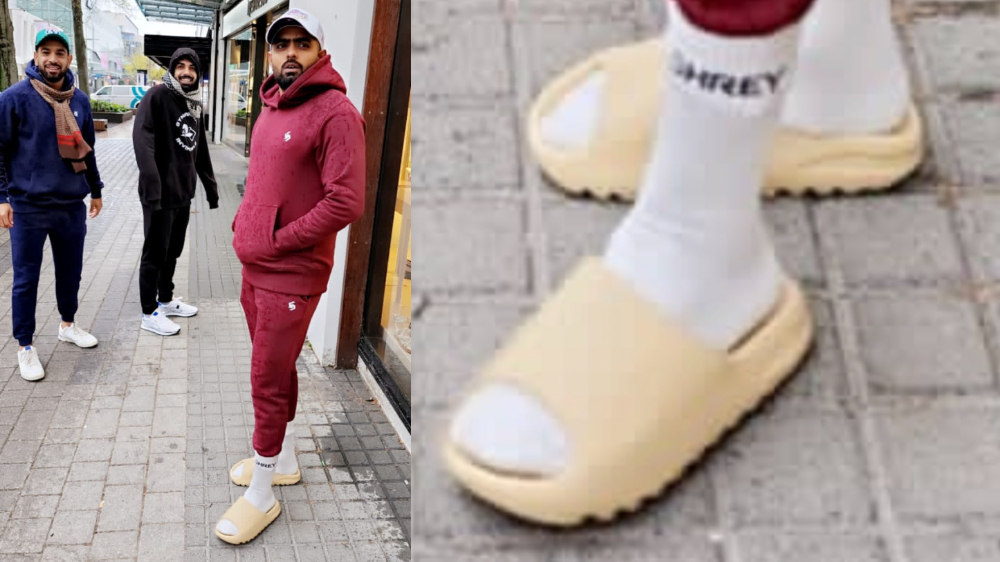 Pakistani cricket captain, Babar Azam, has gone viral on social media for a picture of him wearing designer chapli in Christchurch, New Zealand.

The prolific batsman’s footwear has fans divided on the internet.

Wearing a maroon hoodie with matching trousers, and a grey hat, the skipper is seen enjoying the chilly New Zealand weather with his teammates, Shadab Khan and Haris Rauf.

The picture of Babar Azam with ‘the boys’ was posted on Twitter by Shadab Khan and captioned:

What caught everyone’s attention online is his footwear, though. The renowned batsman raised a few eyebrows by choosing to wear designer chapli with his socks pulled over the trousers.

However, these aren’t just any ‘designer chapli‘ they are Yeezy slides that cost around $70 or more.

Looks like Babar Azam is a Kanye West fan.

Wats with rhe socks and chappals

My Naani would call me a Gawar for wearing socks under a sandal. Times definitely changing.

Others, however, approved of the skipper’s newfound fashion statement.

Those are yeezy slides mans drippin

Lol, cost is more than 75k
Its yeezy sliders

The Pakistani cricket team recently arrived in Christchurch, New Zealand, ahead of the Tri-Series between Pakistan, New Zealand, and Bangladesh. The series kicks off on 7 October with the opening game between the two Asian sides.

What do you think about Babar Azam and his designer chapli? Let us know in the comment section below.