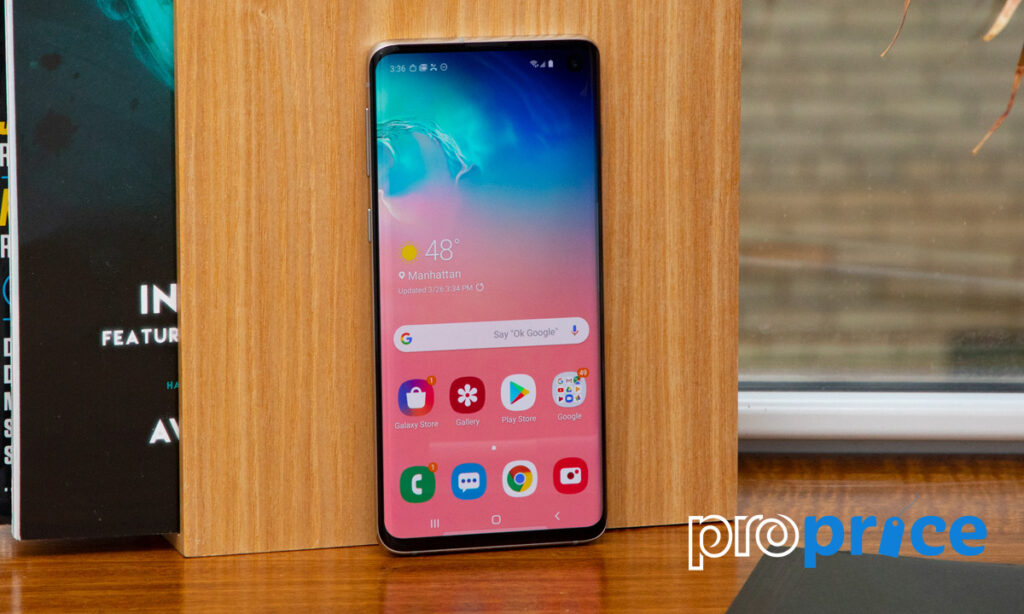 Samsung Galaxy S10 Review | What makes it so special?

The Galaxy S series in general – which we think has been overshadowed by the Galaxy Note (usually every year) – has really found its groove with the Galaxy S10. This device is one of the most complete devices you can buy, which is why we say: it sets the bar.

So, the big new changes or things to know about this phone, are specs, design, and cameras.

The design is the biggest new change on the S10 – it is the most recognizable new design on a phone in a while. Aesthetically, there are a few downsides, but only a few at that. Fresh out of the box, you see a huge, beautiful and bright display; viewable outdoors, great colors and calibration, thin bezels all the way around, thin chin and forehead, and a laser-cut hole in Samsung’s AMOLED panel.

A couple of our downsides about S10 might feel like we knit-picked everything at this point. For instance, we noticed the occasional accidental screen-press from the infinity-edge display which was annoying. The power button on the side feels definitely and annoyingly high up; we wish it was lower.

The One UI is a sleek Android overlay that works well. There’s dark mode, icons are customizable, and the device is Android P fresh-out-of-the-box.

So, specs. You don’t really have to worry about specs. With the Galaxy S10, the specs are great; Snapdragon 855, 8/12GB RAM, 128/512GB storage, and performance of course will fall in line with all that.

The body is glass and metal, but somehow this phone is super-lightweight. The hole-punch rarely gets in the way of anything. It doesn’t block any controls in games or apps, and it’s small enough to fit essentially in the notification bar.

This is a solid waterproof phone, and with a good enough rugged-eyes case, the S10 could easily replace the GoPro – just throwing it out there.

Talking about software updates, now, you can remap the Bixby button to do ANYTHING you want (almost). But there won’t be any voice-assistance with whatever changes you make.

The ultrawide camera sensor is the only new update to the Galaxy S series camera setup. The other two cameras are essentially the same as the ones sported on the Galaxy S9. The image quality is somewhat behind the Google Pixel and iPhone devices.

The primary camera is still very good, especially when you give it enough light. It handles colors and high dynamic range better than ever, thanks to the updated camera app. Essentially, you’re looking at the same tech; the dual aperture main camera with OIS, the second telephoto camera that you’ll ‘almost never use’ but hey, it’s there if you need it.

The standard characteristics of photos from the Galaxy S10 are sharp, colorful, evenly lit, not a ton of contrast but still vibrant and a little overexposed. The ultrawide camera is the most fun addition by far. Although there’s no OIS, you wouldn’t need it at this focal length.

The front-facing wide-angle camera is good for selfies. It still draws a depth map, which might fail a few times before you get the natural hang of it. There’s overexposure, but overall, we give this setup an encouraging B+.

Abstract and architecture photos look good; distortion can get a little much if you’re trying to capture subjects or people but overall, you’ll get a much unique look than the portrait.

The one new spec to note is the battery. The batteries are bigger and – we have to say this – the 3400mAh battery on the S10 has been excellent. We got more than 10 hours of on-screen time with this huge screen, which is super impressive.

Water resistance, headphone jack, expandable storage, WiFi 6, and Snapdragon 855; this phone is almost complete. If you want to judge the phone by ‘the five pillars of a great smartphone’, you have a timeless build quality, battery life is excellent, performance is seamless, the cameras are nice, and the display is beautiful as advertised.

If you’re in the market for a flagship purchase, the Samsung Galaxy S10 is an awesome choice.