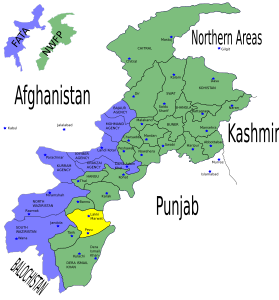 A news item published in ‘The News’ on June 23, 2008, revealed that two sub-engineers of Warid Telecom named as Muhammad Kashif and Gul Bakht Khan were kidnapped by unknown persons in Lakki Marwat, (the yellow area spotted in the map) while they were installing a cell site in the area. However, they were not rescued yet despite appeals by the families of kidnapped to Chief Minister of N.W.F.P.

The situation in our country is getting worse, specifically in NWFP, where Talibaans are taking control of cities. I am not sure about what cellular companies have their strategies regarding the security of their work force and cellular towers.

We know that cellular companies in war effected areas like Iraq, have hired security companies. recently Zain (a cellular company in Iraq) has hired a security firm named as “Al Ihsan Security Company” to provide protection to its cell sites and engineers, who has deployed 7000 security men to protect its 1300 base station.

Cellular companies operating in Pakistan should look around for any such possibilities to safeguard the lives of their workers and their assets as well. Keeping in minds that there is no hope from government in bettering the situation!