4th InfoSec 2008 International Conference on Information Security, co-organized by National Response Center for Cyber Crimes (NR3C), FIA is going to happen tomorrow (August 27, 2008) at Marriott Hotel, Islamabad, Pakistan. This time, the audience will be really shock to see a controversial person in Pakistani Internet Community delivering his presentation on a topic named as: “Cyber Crime Prosecution: Investigation, Forensics Procedure and the Court”.

The organizers of the event may lack the information that this person, a legal expert, named as Zahid Jamil is behind the self proclaimed Domain Name Dispute Resolution Centre (DNDRC); who is allegedly involved in very serious kinds of Cyber Squatting activities by forming DNDRC under the domain names of DNDRC.com, DNDRC.net, DNDRC.org, DNDRC.info, having confusingly similar domains to the ADNDRC.org the ICANN approved organization.

He has allegedly hijacked .PK domain names such as BUDGET.COM.PK and DJUICE.PK to earn easy money of about 800 USD per case but after receiving tough time by original registrant of DJUICE.PK on his unilateral and biased decision, Zahid Jamil has reportedly closed this business due to severe loss of credibility among the Internet community of Pakistan. 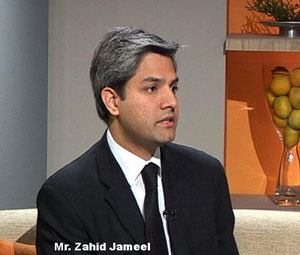 When E-Crime Bill was introduced in the country, he opposed it aggressively on different forums but on the other hand, he is misusing it by threatening the Pakistani people with it. At ICANN, Zahid Jamil admits as “I have also been working informally with the Federal Investigation Agency’s National Response to Cyber Crime Cell (NR3C) in certain cyber crime cases.” http://gnso.icann.org/council/soi/jamil-soi-28jun08.shtml

The real owner of a hijacked domain had said on a public forum as: “Yesterday I have received some serious threats via telephonic calls from the DNDRC (Domain Name Dispute Resolution Center for .PK) domains regarding my complaint on the domain; they have pressurized me to withdraw my complaint. As a matter of fact I had already proved them that I have never been contacted by them on this domain dispute…”  The DNDRC should have no right to make phone calls to the victims of their decisions to further threaten them.

Zahid Jamil is apparently also involved in Typosquatting, also called URL Hijacking, which, according to Wikipedia, is a form of cybersquatting which relies on mistakes such as typographical errors made by Internet users when inputting a website address into a web browser. Zahid Jamil owned the domain name of DOMIANNAMEDISPUTERESOLUTION.COM (with misspell of DomAin as DomIan) to redirect visitors of DOMAINNAMEDISPUTERESOLUTION.COM, registered by a US based Fross Zelnick Lehrman & Zissu, P.C, a Top IP Law Firm of the world located at UN Plaza, New York. http://www.frosszelnick.com

Zahid Jamil also used to impress the Pakistani community as a member of an ICANN constituency (the only member in that constituency from Pakistan) with voting rights in the ICANN structure” but very few people know that Mr. Tim Ruiz of ICANN has replied him while discussing Revised Community Travel Support Procedure for FY09 as: “Zahid, If the policy work of ICANN is not core to your business, why are you involved?( Reference: http://gnso.icann.org/mailing-lists/archives/council/msg05345.html)

There are also reports circulating that Zahid Jamil is involved in another illegal online Business at www.dotpk.pk  which holds Domain Names of Pakistani Business Community illegally like: ARYDIGITAL.PK, DAEWOO.PK, HOLIDAYINN.PK, BEACONHOUSE.PK, LUMS.PK and many more. He is securing the money by selling those held domains, eg: GEONEWS.PK, GOOGLE.PK, NOKIA.PK, etc. By registering .PK Domain Names of Trade Mark Holders with proxy names, he don’t left any option to the business community but to buy domain names at DOTPK.PK or to consult his DNDRC whose fee is 800 USD per case.

Thus, due to his controversial role in cybersquating of his illegal businesses, we should object his any role at national and international level which could harm public interests at the large.  A person who himself is violating internet law and openly examples cybersquating should be discouraged to represent at InfoSec 2008.

If someone is interested to know more about him, just type in Google Zahid Jamil DNDRC.

Disclaimer: I found this article of controversial nature and ProPakistani.com does not own and may not agree with discussion carried away in this article by the original writer. Furthermore, I also discovered that some of the content in this article was taken from Pakpoint.com and mobizong.com