We have discussed before, how the Government of Pakistan tried to recover their budget deficits from Telecom sector in 2008/09 budget. We had mentioned then that this is a clear misjudgment of the government to heavily rely on a single sector, and this could ultimately return results in negative manner.

After almost a year now, this has been proved that added taxes didn’t turn only negatively for government, as it received decreased (or lesser than estimated) taxes from telecom, but industry itself got impacted in a significant way.
Serious implications, that have been witnessed throughout the year, are shouting that government must re-consider its tax policy. Here I would opine that Pakistan Telecommunication Authority also failed to convince federal government over taxes issue, as I believe regulator had an idea of the high tax consequences.

It may be recalled that excise on telecom services were raised to 21%, which was previously 15 percent. Similarly, handset industry was not left behind, as Rs. 750 tax was imposed on import of each cell phone.

In order to study implications of taxes on cellular services, first let’s review following graphs and table to know the telecom contribution to Exchequer in recent years 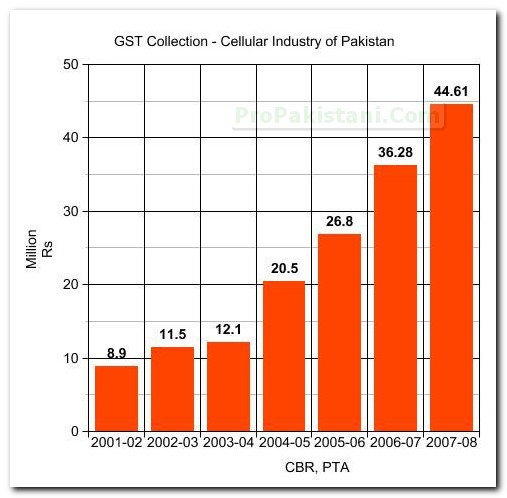 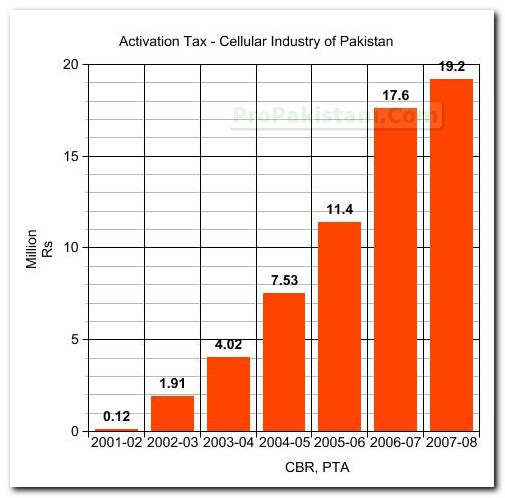 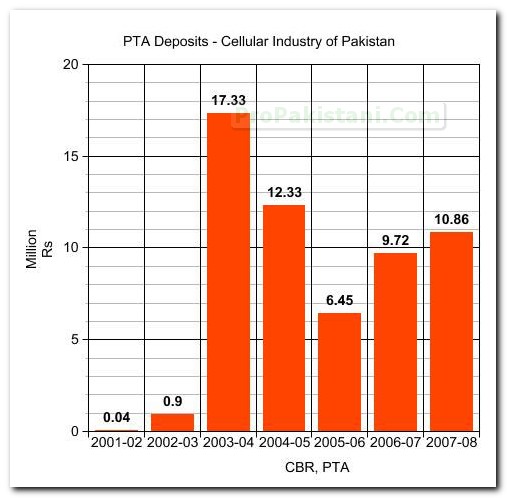 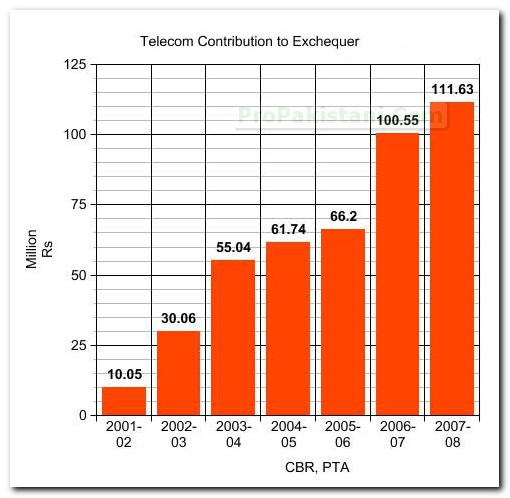 Clearly, growth rate of GST/FED contribution fell down, even the estimated value of Rs. 120 billion was not met in year 2007-08 for Telecom contribution.

Thanks to higher GST, rate of connected calls was low, resultantly low cellular revenues and ARPU, and in return the low contribution towards national exchequer. 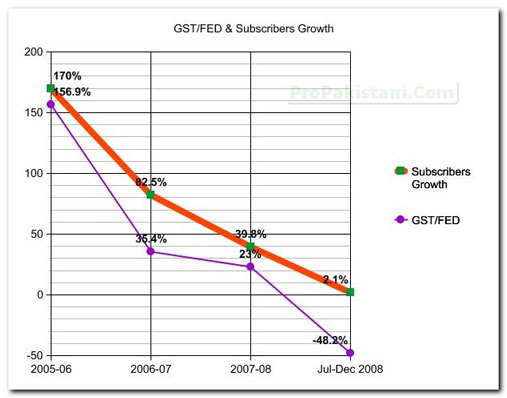 See, how the growth rate of GST/FED collection is impacted, also the subscribers growth rate.

One may ask me that we should not term high taxes as only reason for this situation, for instance, he/she may question to add other elements too, such as, recession, then my answer is that recession should have impacted GST/FED Collection rate only, not the subscribers growth rate. Viewing the both lines hitting rock bottom level reveals that high taxes are playing pivotal role in all this.

Rs. 500 custom duty and Rs. 250 regulatory duty on each handset has impeded handset growth in the country. This negative growth rate can be termed good, as few may comment that Pakistan saved some bucks for not buying phones, but unfortunately, this is not the case; as these high taxes encouraged illegal import of cell phones.

Federal board of Statistics reported that handset imports fell by 76 percent in the three-quarters of the current fiscal year 2008-09. However, on other hands, mobile manufacturers are of the view these high taxes hit the industry as well as the government alike.

Government must re-think the tax policy and must bring down GST to 15 percent level to help cellular companies achieve greater ARPU. Similarly, removal of activation tax can revive the lost growth rate of subscribers’ addition. Government should relieve handset market too by dropping the tax level on handsets