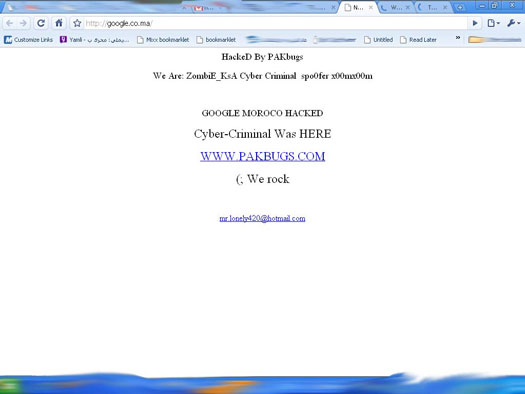 Domain name remained down for many hours, while people got enough chance to record plenty of screenshots here and here.

TechCrunch says that there’s a bit of confusion about how the hack was performed exactly, but it appears as if the hackers found a way into NIC.ma , which controls the DNS for the country, and targeted the Google domain name especially. The domain was pointed to a different server, and the web page above was shown when people tried to access the search engine. Google apparently at one point automatically relayed visitors from Morocco to Google.com instead of Google.co.ma, but it took a while to get the latter functioning correctly again.

PAKbugs.com leads to a forum where Pakistan hackers hang out, and they’re being proud what they did today here.