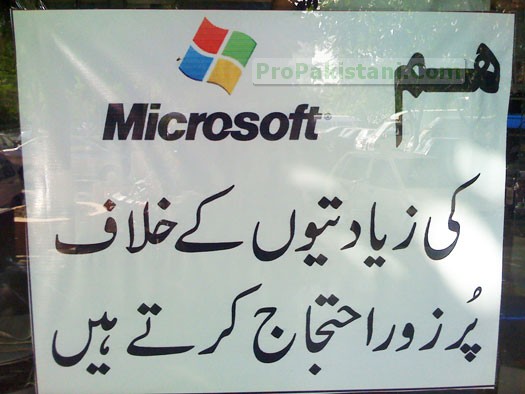 You remember this news: FIA Launches Countrywide Crackdown Against Pirators?

If you don’t then just to recall you guys that Microsoft is not in good mood these days. They are aggressively acting on their mission of clearing the piracy from the country (which is impossible, still.. )

Though we remember that they are giving away free software to students, but at same time they are approaching FIA to raid those places where Windows is running in pirated form; especially to computer retailers who install pirated Microsoft Windows on new machines.

Now our innocent Pakistanis think that Microsoft has at once turned cruel, and that they were using free software for so long, then why to spend thousands of Rupees for each copy of windows.

My advise is to all those effected is to try Linux, yea let’s not spend money but get something better than Microsoft Windows at same price, i.e. Rs. 30 per CD – how’s that? Or otherwise, let’s start paying for what we use, either its physical or virtual service; fair enough!

Thanks to Saad Hamid for sending me above Pic