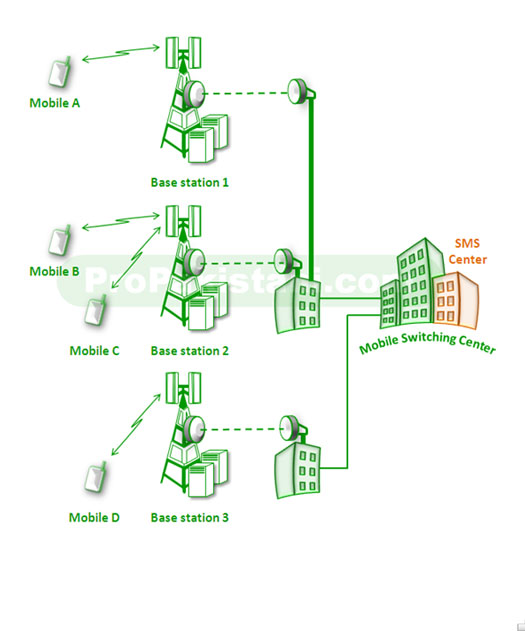 Today, of all the vast range of alternatives, ‘SMS’ is increasingly becoming the first choice for reaching audiences (single to single or single to multiple communications – also known as broadcast communication). There are many Web-based mobile SMS services, commonly known as ‘Web-2-SMS’ offer this service for free.

Globally, the most popular one of such service is Twitter. Its Pakistani counterpart Chopaal offers more or less the same kind of services to Pakistani cellular users.

In this post, I’ll try to give a general impression of mobile to mobile and web-2-sms architecture with the services and equipment involved.

This guide involves no technical details, hence it can be used by general readers to understand SMS communication.

First, let us see how an SMS is originated, routed and delivered in a cellular scenario.

What is an SMS Communication? (SMS over same network)

The diagram above depicts a typical GSM cellular network. In such a network, an SMSC (SMS Center) is responsible for handling the SMS operations. When a mobile generates a message, it first reaches the SMSC. (even when Mob B generates a message for Mob C). SMSC then routes the message to its destination.

SMS Communication From Network A to Network B

As a common practice, an SMSC controls the traffic of a single network (the messages originating in that network). It means that when an SMS is sent from one operator’s network to another’s, the SMSC of the originating network is responsible for delivering the message to the other. This can be easily verified when receiving an inter-operator message on a Nokia phone. Nokia usually displays the ‘Message centre’ number after the ‘sender’ number in the end of the received message. The initial 3-digits of the message center number reveal the originating-network and that the message is delivered by the originating-network-SMSC. 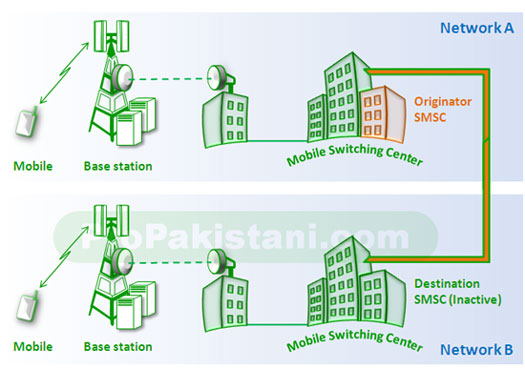 The case-diagram above (originator SMSC delivering inter-network messages) is valid when the two networks are based on same technologies (for example: both are GSM networks).

SMS Communication from Network A to Network B of different Technologies

If the two are not same, an SMS Gateway is required fot both SMSCs to communicate. In this way the originated SMS first passes the Originator SMSC, then the SMS Gateway which then forward the SMS to Destination SMSC. The Destination SMSC then delivers the message to destined mobile in network-B. This case is illustrated in the figure below. 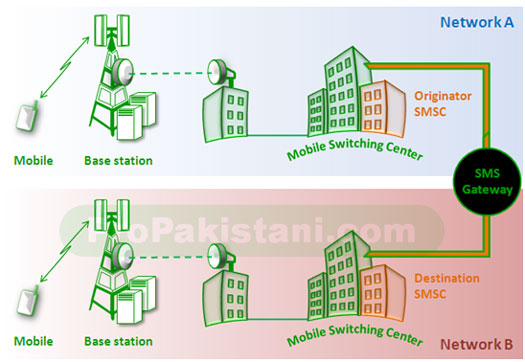 What is an SMS Gateway?

Transforming SMS message into plain text message means that mobile messages can be originated and delivered without a mobile phone.

The Gateway can convert complicated SMS protocols into more common protocols such as HTTP. This means that developers can use web-based applications to develop an independent SMS service.

Figure below clearly illustrates how a web based application can be used to deliver SMSs. 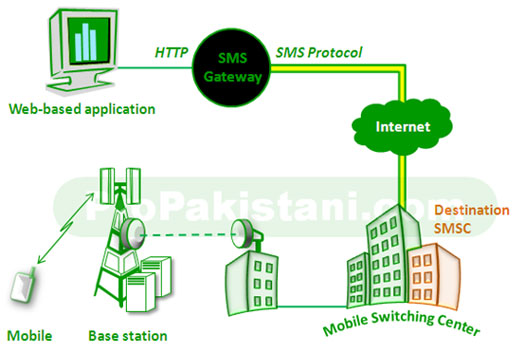 This approach is mostly used by premium rate messaging services, and requires operator’s intent to use its resources including SMSCs. Therefore allowing standard rate SMSs to be converted into a different rate based on some rules and agreements. Common examples are SMS voting (recall how public votes are casted in American Idol), TV Quizzes, and other such services. But this architecture is usually seen when messages are being generated from mobile and terminated at the application.  A typical example is the live Commentary on news TV channel slides by sending on SMS to a number like 1234 (yes, they are unique 4-5 digit numbers). 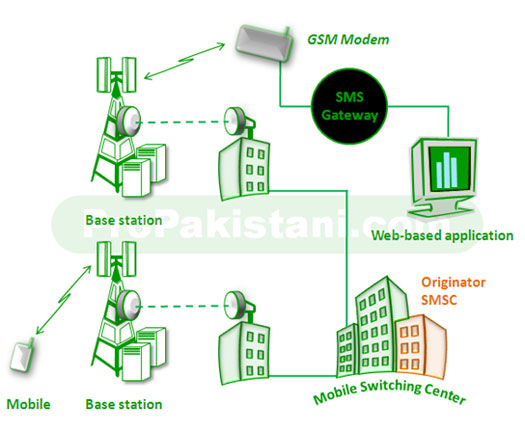 It is already illustrated in the first two figures how an SMS is delivered in inter-operator and intra-operator networks. In the above diagram, the same set-up will be followed with an exception that the messages are not generated be a cell phone but a GSM modem. And the user generating the SMS is scheming the modem remotely through the internet using an online application.

With the above architecture, if I send u an SMS using a web service, the ‘sender’ number displayed on your screen will be the number of the SIM being used by the GSM modem originating the SMS.