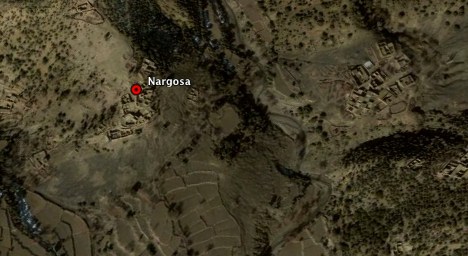 Stefan Geens has figured out a spot on Google Earth that is likely to be Baitullah Mehsud’s in law’s house where he was reportedly shot down by a missile attack.

Stefan figured out the exact location of a village in remote areas of Wazirastan, Federally administered Tribal Areas, based on news reports published in media.

The missile fired by the US drone hit the home of the Taliban chief’s father-in-law, Malik Ikramuddin, in the Zangarha area, 15km (9 miles) north-east of Ladha, at around 0100 on Wednesday (1900 GMT Tuesday).

Stefan notes on his blog,

Ladha was easily found via a default search in Google Earth (and the returned placemark comes courtesy of an entry in Google Earth Community); it is indeed in the South Waziristan region of Pakistan, and is the location of an old British fort. Then it was a matter of finding Zanghara. Here Geonames.org once again proved to be an invaluable resource. A fuzzy search for “Zangarha” in Pakistan returned one clear answer exactly 15km northeast of Ladha: Zangarai Algad, where “algad” denotes that the feature name is a stream or shallow valley. This valley extends northeast-southwest for a few kilometers, and I think it is likely this is the place referred to by the article.