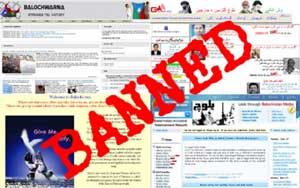 Just another heartening yet controversial news coming from the tech sector of Pakistan, PTA starts banning anti-Pakistan websites that are allegedly funded by RAW and are run by Baloch separatists. People have been arguing that this is yet another attempt to curb freedom of speech but I believe freedom of speech doesn’t allow you to propagate false information especially when it’s going largely against the national interests.

I won’t politicize this writeup as ProPakistani maintains a good policy of staying away from politics but we all have witnessed how Baloch terrorists and separatists have been mobilizing through the technology aiming to strengthen their anti-Pakistani propaganda. I would like to be very clear here that I am not against the freedom of speech and I know that Baloch nation has been deprived but I would never support any manifesto of BSO or BLA.

So the websites that have been banned across Pakistan are:

So the comments form is the platform for you shout out and participate in the debate whether this was a good move or a bad move as in to block freedom of speech.