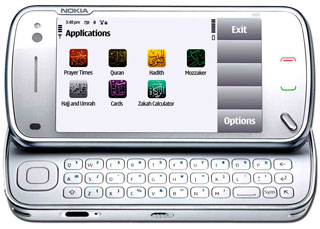 Nokia announced that its Ramadan applications for 2009 have now become available on Ovi Store.  The updated free mobile applications tailored for the Holy Month of Ramadan can now be downloaded on the compatible Nokia devices directly from Nokia’s Ovi Store.

“Last year’s applications were very well received, as we saw over 2.4 million Ramadan applications downloaded.  And based on the feedback we had received from Nokia consumers, we have further enhanced the offering this year to include additional applications as well as upgrades to some of the existing features.  The applications this year also support a wider range of devices, to include both touch and non-touch Nokia devices,” said Imran Khalid Mahmood, General Manager, Nokia Pakistan.

He added, “Ramadan applications for 2009 are free and join a variety of content on the Ovi Store ready to be downloaded and enjoyed.  Ovi Store has paid and free content from a range of global and local content providers intended to be a friendly, locally-relevant store for the widest range of devices.”

Users can launch Ovi Store from the Download folder on the main menu on their Nokia device or access nokia.com/Ramadan on the PC.

This year’s Ramadan applications are feature packed, and include the Holy Quran, Prayer Times, Hadeeth, Zakah Calculator, Mozzaker, Hajj and Umrah and Cards.  New features include Quran recitation from multiple recitors, which users can choose to download, based on their preference and in MP3 form.  Prayer timings and Qibla direction are provided for 1000 cities in 200 countries, along with the ability to add, remove, update and edit any location using the GPS.  The new Zakah Calculator helps Muslims calculate Zakah based on their income.

The Ramadan applications are developed by ASGATech, a Forum Nokia Premium Partner in the Middle East, with all content reviewed and approved by Al Azhar Al Shareef.

Nokia 2009 Ramadan Applications include the following: