Due to widespread use of computers and electronic gadgets, every tabletop is now a maze of wires connecting computers, peripherals and other devices. Experienced by all of us, the mess of wires is the most unwanted, nevertheless the most unavoidable impediment on our desks.

Bluetooth technology provides a solution by interconnecting these devices over an inexpensive yet reliable radio link. In the coming years it is expected that the entire electronic gadgetry will feature a Bluetooth wireless link to take over any sorts of inter-device communication leaving out desks with no wires but power cables.

What exactly is Bluetooth technology?

Bluetooth is nothing but a communication protocol (set of rules required to send digital information over a digital communication channel; the language two electronic devices use to communicate) defining the short-range communication standard among two (or more) radio enabled devices. Brought into being by a couple of research students at Lund University (Sweden) in collaboration with Ericsson, Bluetooth standard in now maintained by SIG (Special Interest Group of Bluetooth) formed in 1988 when IBM, Intel, Nokia and Toshiba joined Ericsson in the venture.

Where did it get its name from?

The name comes from a Viking ‘Herald Blatand’ or Herald the Blue Tooth who was the king of Denmark back in 900AD. King Bluetooth is attributed with uniting the Scandinavia specially Denmark and Norway into a single kingdom and bringing in Christianity all over; the time when most of the Europe was divided into religion-centered territories.

The Bluetooth Technology is metaphorically named after the king as it sets a standard for communication regardless of manufacturer and the device itself.

Where does it falls under the wireless network classes:

Bluetooth falls under the WPAN (wireless personal area network) classification among the wireless network classes. A brief representation of such classes and technologies falling under them is demonstrated below: 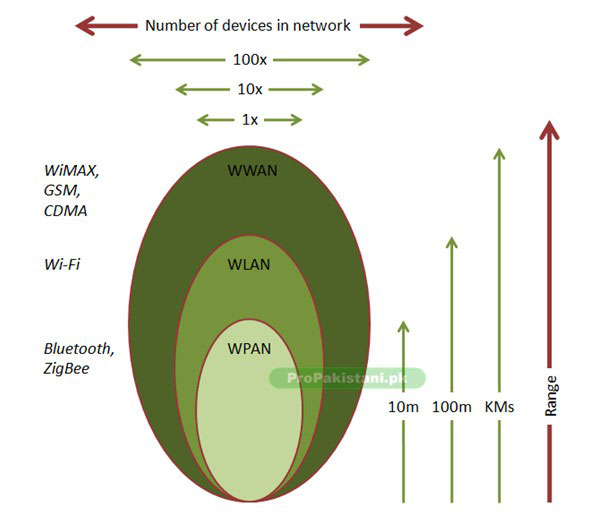 For Bluetooth communication there must be a connection between devices before the data can be transferred (unlike IrDA, the infrared communication). The communication is always based on a master-slave principle for setting up the connection. This means that control signaling is responsibility of only one device, not both. However, it must be noted that master and slave can switch sides; it’s just a matter of which device was rendered discoverable and which device discovered the other while the connection was being made.

Though the connection is wireless, it is automatic and that’s the best feature of it if we compare it with its competitors, and also one of the leading reason behind Bluetooth’s increasing popularity.

The devices to communicate form a piconet (a PAN sub-class). In a piconet, two or more devices can be connected to the network but they share the same medium (The designated radio bandwidth in case of Bluetooth communication).  For a Bluetooth piconet, the master communicates with all the slaves (maximum 7 slaves can be connected to one master, making a total of 8 devices in the piconet, the number 8 automatically makes sense to anybody even slightly familiar with computer basics) and creates a point to multipoint setup. 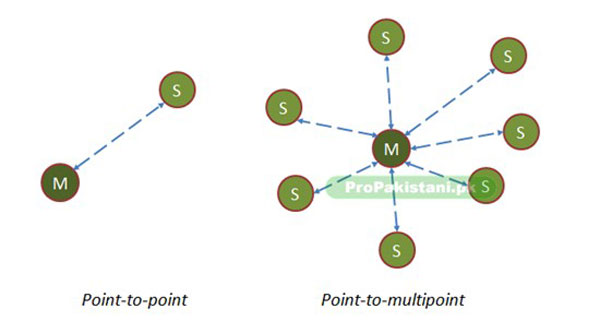 Now, two question might pound one’s mind, how the devices establish a connection and how do they share the same medium?

As u must have noticed while making a connection among two Bluetooth devices, both the devices recognize each other’s type (desktop computer, laptop, mobile phone, Smartphone, PDA etc). This is because every Bluetooth chipset is assigned with a unique 48-bit ID code (MAC address for those who can understand the term) managed be the IEEE. These codes are divided into ranges each specifying the type a device may fall into.

Whenever Bluetooth is powered on (and set Discoverable), the device sends out signals broadcasting its ID code. Since Bluetooth protocol specifies a low power transmitter, the radio range, as already stated, is a mere 10m approx. This makes other Bluetooth devices in equally near vicinity to receive the signals. 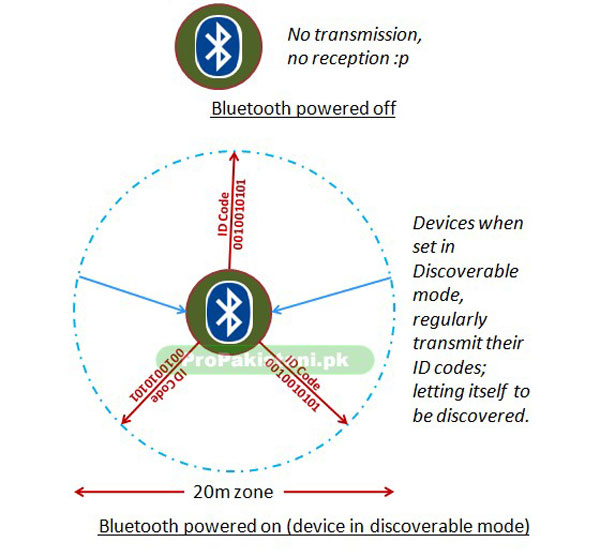 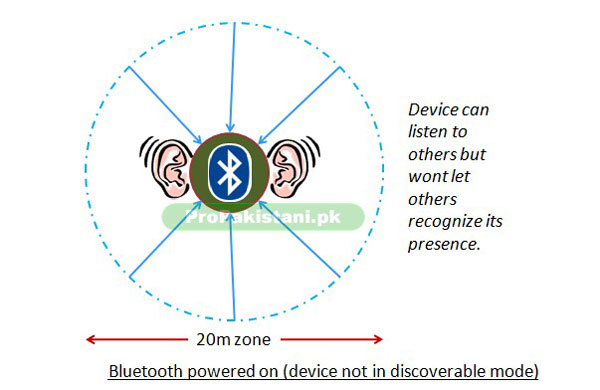 When a device is powered on but does not broadcast its ID code, it is said to be in ‘Non-Discoverable’ mode. Since the device is not disclosing its presence, another device cannot recognize it and request a connection. However, this device itself can initiate communication by listening to another’s transmitted signal, extract the ID and request for the connection.

Formation of a point-to-point connection:

Two Bluetooth devices will typically follow the following set of events for establishing a connection, transferring data, and terminating the connection.

Formation of a point-to-multipoint connection:

A point to multipoint connection is formed in a same manner, except that after point-to-point connection is established, the connected device is assigned another 3-bit ID. (This ID is not the same as ID Code and is temporarily assigned to keep track of devices in the point-to-multipoint network. Whereas, the ID codes are permanently hardwired on the Bluetooth chipset and are unique among all devices that exist) The 3-bit ID helps in keeping track of devices within a piconet. 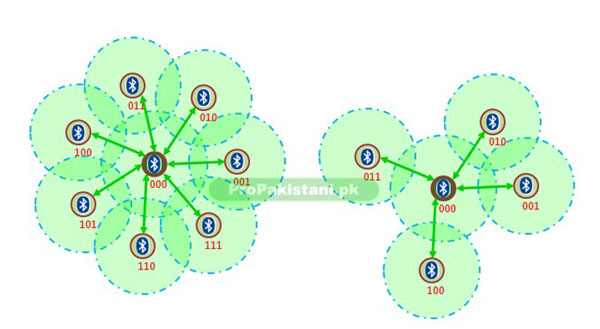 A 3-bit ID can make a maximum of 8 different combinations. One is attributed to the master, the rest 7 are assigned to each slave.

How does Bluetooth Share the Same Medium without Interfering?

First of all, as we know that Bluetooth is bounded with very short range radio, making a very less probability of more than a couple of devices placed in each other’s range. Naturally, the far off devices never interfere.

Let’s analogize the situation. There are 100 men sitting in a hall grouped in 10, totaling 10 groups. All the group members will obviously need to talk to each other. Naturally, every man will talk in a voice loud enough for the group members to appreciate. This will also not create interference among different groups present in the hall. On back of the mirror, if every single person is shouting on top of his lungs, you can yourself picture the situation fairly well. 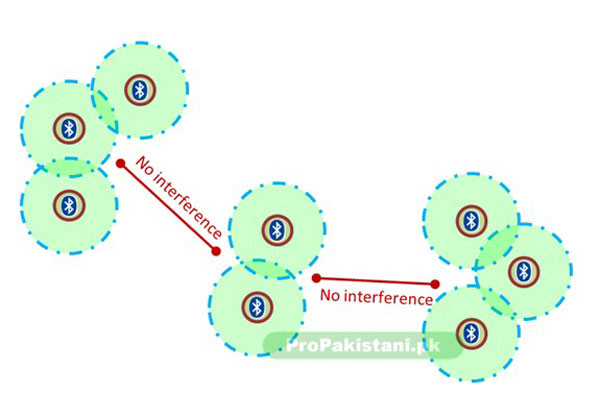 Now how is the interference avoided among the few devices lying in each other’s radio range?  Bluetooth communication is not assigned a separate band (assigning a band for exclusive use by any technology makes the technology costly since the user has to pay the regulatory authority for using that band) Therefore, it has to use the ISM band (Industrial, Scientific and Medical Band; a free of cost, free-for-all band assigned by the International Telecom Union for short range radio communication).

Consider a home environment with certain free band devices in operation. Now if you have a comparative exposure of working these electronics, u must have experienced that sometimes they interfere with each other because they work at a specified frequency. That’s why they are tunable to adjust operating frequency in case there is a clash between two. For ease of communication and automatic connectivity, a Bluetooth user can never have been faced down to rectify the connectivity issues. Frequency hopping is the technique guiding the easy way out (not to mention modern cordless phones which themselves support frequency hopping to avoid interference). 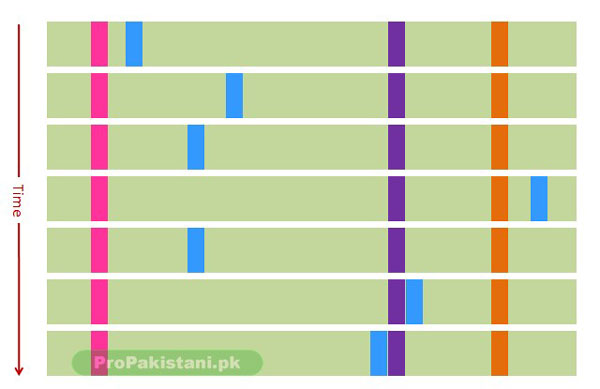 Frequency hopping is a technique that makes a device to frequently change its operating frequency. Frequently means hundreds of times a second (Bluetooth specifies frequency hop of 1600 times a second). A Bluetooth Master randomly selects 79 channels of the ISM band, lets the Slave know about the selected channels and then the two devices communicate hopping about these 79 channels. The technique practically eliminates any chance of interference. Because if an interference occurs, it remains for 1/1600=0.625 microseconds; distorting an amount of data that can easily be corrected by error correction techniques present in every digital communication system.