Orascom Telecom Holding reported net loss for the fourth quarter of 2009, as high as $46 million due to unfavorable events in Algeria and a tax-rate increase in Pakistan.

The company didn’t give a fourth-quarter comparative figure in its statement and issued only combined financial figures for year 2009.

Total number of subscribers reached 93 million, up 19% from a year earlier.

“Income was mainly impacted by the unfavorable events that took place in Algeria, as well as the increase in the tax rate in Pakistan,” said OT statement.

Orascom was bombarded with $600 million tax claim and penalties for the fiscal years 2004 to 2007 despite the fact that Orascom Telecom Algeria, or OTA, was tax exempt until mid-2007, the company said in November.

“We are keen to stay in Algeria; it is one of our main assets and until this incident we were very happy there. However, we need to understand if our investment is welcome there or not. If not, we will consider other options,” said Orascom Telecom’s Chairman Naguib Sawiris in the statement.

Orascom Telecom is in a one-year dispute with France Telecom over their stakes in Mobinil, Egypt’s largest mobile operator by market subscribers.

OT has operations in countries including Algeria, Pakistan, Tunisia, Bangladesh and North Korea. 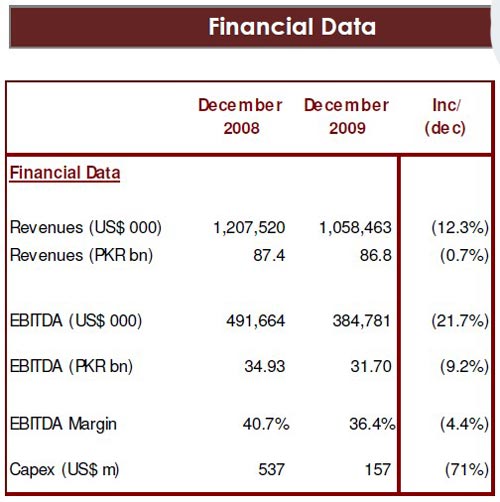 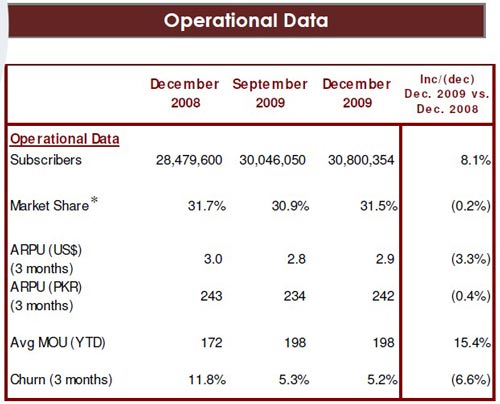 Orascom claims that According to internal reporting, Mobilink’s market share reached 40.5% in 2009.

Orascom’s Earning Report for 2009 can be downloaded by clicking this link – PDF File (1.1 MB) Right Click and Select “Save Target as”

Mobilink has issued a statement, just now, which revealed some of information for Q4, 2009. It said that company revenues as per local currency showed an increase of 5.3% as compared to Q3, 2009.

EBITDA for the same period rose by 16.2% and the EBITDA margin improved by 3.4%. The company’s net base increased approximately by 0.76 million subscribers in this period.

“Aggressive stance taken by the company in the wake of an overall stressful environment, backed by Mobilink’s distinct advantages of coverage and quality, has paid off. We have retained market share, increased subscriber base and stabilized revenues in rupee terms”, commented Rashid Khan, President and CEO, Mobilink