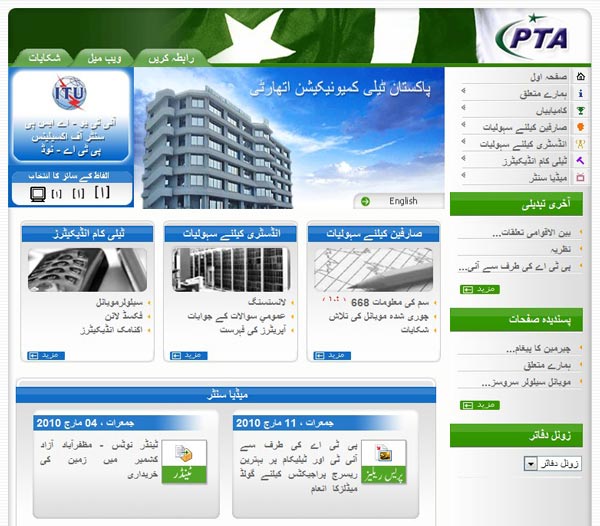 We are told that PTA is officially launching Urdu website tomorrow in a ceremony, reportedly, Sardar Latif Khosa, Minister for IT and Telecom is going to inaugurate the website.

In terms of technologies, Urdu version is using PHP as programming language and MySQL for database. Permalink structure is going to be the same as they are for English version. Fonts are pretty understandable, but could be even better.

PTA’s website’s permalink (or urls) are real problem for many users, for instance, these links are created based on user sessions and can’t be re-used after a set period of time.

However, a good step by PTA indeed.

Looks PTA has just flipped the page for Urdu version, and meanwhile Pakistani Flag in the header was treated in same manner.

Thanks to Shahzad Khan for pointing out on ProPakistani Facebook Page.

PTA has launched its Urdu website, with flipped flag, despite we informed the authority of the issue. Following is the official press release

ISLAMABAD (March 18 2010): For the facilitation of general public and telecom users, Pakistan Telecommunication Authority (PTA) has launched the Urdu version of its official web-site on Internet. In this connection, an inaugural ceremony was held here at PTA Headquarters.

This new Urdu version of PTA website would contain the same contents of the English version converted into simple Urdu language with similar layout and design. This step has been taken in view of providing online information to those internet users, who are generally less-educated in web-surfing or less-familiar with English language.

Now, they would also be able to enjoy the same facility and could access the online available information regarding PTA activities, decisions, policies, Consumer Protection regulation and Complaint Management System (CMS) through a simple click.

PTA directly receives complaints of telecom consumers on different issues at its headquarters and Zonal offices as well as at its website. A special CMS has also been developed for this website to integrate the new consumer complaint system with the telecommunication operators.

The new complaint system would also provide a multilingual interface to the consumer both in English and Urdu. Under the link titled “shikayaat” the consumers could lodge their complaints by filling and submitting a simple online complaint form.

Besides, SIM Information System 668, Blocking of Stolen handsets through IMEI number, Telecom Sector Indictors and other such services would also be available on Urdu version of PTA’s website. To visit Urdu version, users may follow the link www.pta.gov.pk which opens a menu page wherein an option is given to the users to open the Urdu website by simply clicking a button.

Addressing the inaugural ceremony, Advisor on IT & Telecom, Sardar Muhammad Latif Khan Khosa appreciated PTA’s efforts for achieving remarkable progress in the telecommunication sector of Pakistan. He said that the Government is committed to enhance the quality of ICT sector.

As we innovate in technologies and services on the Internet, Mobile and other segments of Telecommunication in our attempt to strengthen their outreach and accommodate the needs of the new user segments, it is vital to ensure that our exclusive regulatory and policy structure is preserved, maintained, and built upon.

He emphasised that there is a strong connection between local language editions of website and penetration of Internet inside our society. He valued the efforts put in by PTA to execute its notion of facilitating the telecommunication consumer by introducing new platforms.

Chairman PTA briefed the Advisor to the Prime Minister on structure, scope and achievements made by PTA. He said that PTA believes that lack of local language content is one of the main hurdles behind the proliferation of Broadband Internet services in Pakistan. He said that we are collaborating with industry and academia to bridge this vital gap and offer local content and applications to the people. -PR