Tired of weak Wi-Fi signal strength? Well there are several methods to boost it up! Easy or hard, cheap or expensive . . . the type of solution depends upon the reason behind the weak strength, but more of it depends upon you on how you tackle it.

Tony Northrop famously suggests 10 tips (on Microsoft’s At Home centre) for improving the Wi-Fi reception. His proposals include things from selecting a central position for the router to installing a repeater unit along with some other soft tweaks. You may check the tips by Googling some appropriate keyword along with his name. Although all the tips seems to be helping in increasing the reception one way or other; one idea seems notably viable for the purpose . . . ‘Replacing the ordinary antenna with a high gain antenna’.

Yes, this is leading to the famous Tin Can Antenna solution, but I am not going to impose the idea as the new thing in, but will try to explain the working of these antennas.

What is a high gain antenna?

When talking about radio antennas, the term Gain refers to the Directional Gain of an antenna. A directional gain is the antenna’s ability depicting its increased signal reception/transmission by receiving/transmitting the signals in a compelled direction. 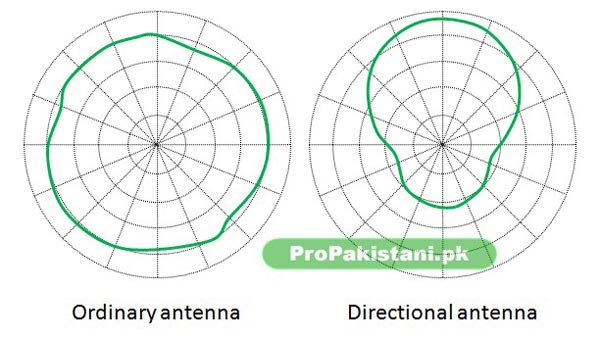 The figure shows percentage radiation of an ordinary antenna compared to that of a directional antenna (antennas are centered in middle of the plot). The ordinary antenna radiates the supplied power equally in all directions, whereas the directional antenna radiates it more in one specific direction than other (radiation direction is governed by antenna design, plus, no practical antenna can radiate in purely one direction nor perfectly equal in all directions).
Reception is affected in equal proportion when switching about the two types.

So the bottom line is that directional antennas tend to have greater range since they radiate most of the power in one particular direction, and better reception since the focus on to one direction for receiving the signal as well. But seeing as there can’t be any free lunch, this comes with a price; the antenna is directional obviously, and needs alignment for proper operation.

What is a Cantenna?

The name Cantenna is derived from ‘Can Antenna’. A Cantenna is simply an open-end cylindrical waveguide (waveguide is a hollow metallic tube used to carry high frequency radio waves), constructed from widely available tin cans. The diameter of domestically available cans (which are mostly containers for tinned eatables) supports waveguide propagation at frequencies of order of couple of GHz. Because of its easy construction and optimum operation frequency centered at 2.4 GHz (as used in Wi-Fi wireless networks) it is domestically constructed by armatures for extending range of their wireless connection; sometimes reaching to up to 6-7Km.

Cantennas, as we all know, are mainly used for extending Wi-Fi radio range over a LOS link (Line Of Sight; yes, directional antennas require a LOS path to work). Additionally they also find applications for Wi-Fi war drivers, free net operators, and system administrators to run Wi-Fi assessment tests. Cantennas are very inexpensive compared to commercially available Wi-Fi repeater units, but are just as good and some people would argue that they are better.
Because of the stated advantages, they are employed in the following applications around the globe:

Interestingly, The Castle in France has four Cantennas installed to form a network; since they can’t drill into castle walls to run Cat5.

Cantennas are inherently cheap and relatively easy to build. The necessary parts and general approach to construction are described below:

Cans of several diameters, lengths and material are readily available with a domestic household; obviously different dimensions will yield slight difference in radiation patterns and directional gains. The optimum length and diameter for a particular frequency can be calculated using mathematical functions discussed later on.

The active element is the part of antenna that actually radiates the waves. For the frequencies we are going to use Cantenna, the wire should ideally be of gauge 12 (which is about 2mm in diameter, but minor deviations from the size shall not be a problem). With these dimensions, the element can be made using a piece of an ordinary copper wire that can be taken out from a three phase high power cable.

Pigtail is radio frequency transmission line; the wire that connects the wireless device to the antenna. Pigtails are readily available at electronic shops dealing in radio equipment (its technical name is RP-SMA cable).
Applying some basic laws of antenna theory, the length of the active element is calculated to be 30mm approx for an operating frequency of 2.4GHz. Wavelength for a 2.4GHz signal is 124mm.

Fixing the things on: 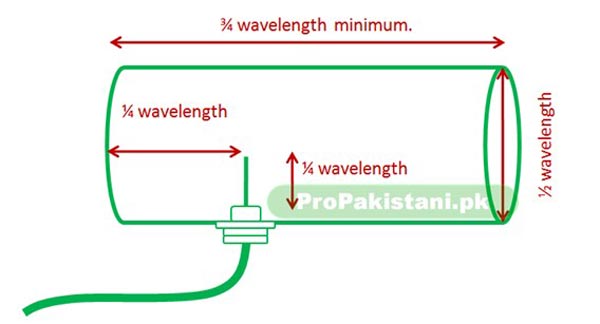 The figure gives a pretty good explanation for the dimensions of the can and placement of the active element in it. But obviously, we are not going to communicate satellites over it, minor deviations from ideal dimensions of the Can won’t make a significant impact. However, the length and placement of the probe are critical factors and may directly affect its performance.

The following figure will explain why the placement of the active element was so critical.

The basic purpose of imposing the tin over the radiator is to direct all the radiation in one direction. In the figure above, the probe radiates the electromagnetic waves spreading away from the source. The waves radiated towards the bottom of the can are reflected back. Because of the careful placement of the probe, the reflected wave superimposes the wave which naturally got radiated towards the open end of the can; combining the radiated power in one direction.
Have the probe not been placed at a quarter wavelength distance from the base, constructive interference would have not occurred, depleting the effective directional gain. Shown below:

Moreover, if the can’s length was less than ¾ wavelength the wave wouldn’t have been precisely directed before been radiated in the open.

Sometimes a funnel is fabricated at the open end of a Cantenna to produce additional gain. The fabrication leads to another type of antenna yet very similar to the Cantenna, and is better known as ‘cylindrical horn’ or simply ‘Funnel Antenna’. The funnel does not contribute to gain while transmitting but increases the sensitivity of antenna whilst receiving, simply by collecting radiation from larger area.

Attaching the Cantenna to your Wi-Fi device:

If you are using a Wi-Fi modem with an external antenna and wish to employ a Cantenna; it is not going to be a problem at all . . . Just detach the supplied antenna and attach a suitably long pigtail connected to the Cantenna the other end. You may treat your router the same way.

And in case you are using a USB modem without an external antenna, you can plant the intact device into the can; same standard for everything else except that the radiating probe is now replaced by the USB modem itself. 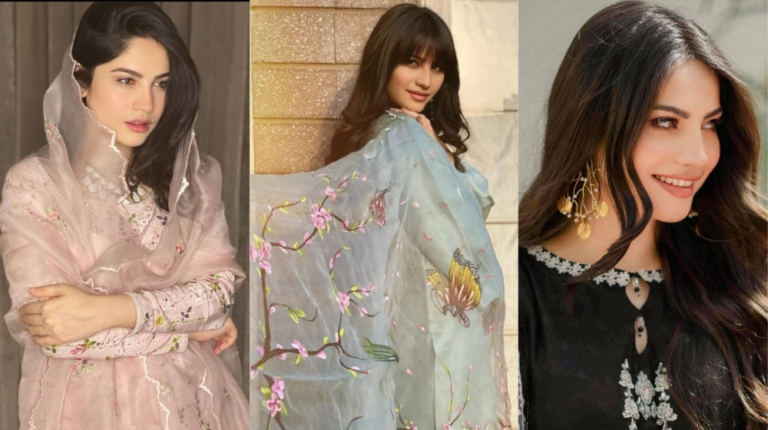 Hiba Bukhari Plays to Her Desi Looks In a Bridal …

Imran Ashraf Writes a Lovely Note for Wife on Nik…

Last Week Eid Essentials That You Need To Have