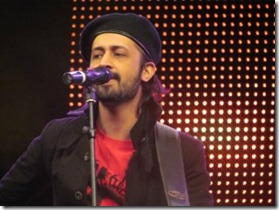 Atif Aslam, the biggest Pakistani pop star of Pakistan is known for very limited or no interaction with his fans.

Unlike, other singers, Atif always refrained from Facebook or Twitter and repeatedly denied accounts which were attributed to him.

This leaves the fans to either write on his Facebook Fan Page or Official Forums.

Unfortunately, both the online presences are not operated by Aslam himself, instead they are administrated by a team of moderators appointed by Atif’s management.

However, today, Atif Aslam has officially joined twitter to send real-time updates to his fans. The account, created on 8th of January, has 500 followers as of now, but has already been verified by the twitter staff.

This has to be the most amazing act for the die-hard Atif fans who can now read Atif’s micro blog on daily basis.

It merits mentioning here that Atif Aslam is currently the brand ambassador for Warid Telecom.