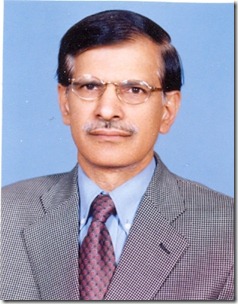 Abdur Rauf Chaudhry has been given additional charge of secretary temporary in the Ministry of Information Technology and Telecommunication recently. He will be serving as secretary IT to resolve the issues of USF and ICT R&D funds.

With the deputation of Rauf Chardhry, the MoITT has been made functional for the first time in the current setup having minister and secretary both have been assumed their offices.

Earlier, the MoITT was working whether without minister for two and half year or it has become secretary-less for nearly a month.

Sardar Aseff Ahmed assumed the charge of the ministry in December 2010 after his previous ministry (Education) was dissolved at federal level.

Abdur Rauf Churdhry, Secretary Cabinet Division, has been deputed as secretary IT for time being. He was also working as secretary with present minister in the Federal Ministry of Education previously.

Official sources said the secretary will be looking after IT issues while the rest of the telecom sector will be looked after by member telecom, Mushtaq Bhatti.

It seems that the government may not appoint a full-fledge secretary in the minister as IT and telecom has not been its priority, an official said on the condition of anonymity.

Unlike, the previous government paid much importance to the ministry, resulting the country witnessed immense growth in the IT and telecom sector till now, he remarked.

In the Federal Government, Mr. Chaudhry has served as Secretary to Government of Pakistan for the Ministry of Housing and Works and the Ministry of Textile Industry in addition to his present assignment as Secretary Education. His other important assignments in the federal government include his serving as Chairman Capital Development Authority (CDA), Additional Secretary and Joint Secretary in the Prime Minister’s Secretariat as well as other ministries.

Born on 7th July 1951, Mr. Abdur Rauf Chaudhry has done his M.A in Economics from the University of Punjab as well as Masters in Development Studies from Vanderbilt University, USA. He also holds a diploma in Development Studies from University of Cambridge, UK. He has attended several courses in the realm of management studies, which include the course on Development and Administration at NIPA, Lahore, Advance Course in Management at Staff College, Lahore and a management course at Kennedy School of Government, Boston, USA.