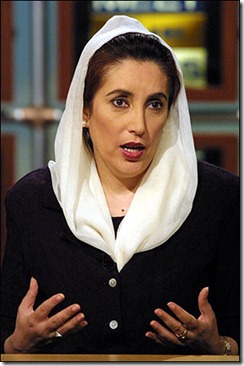 Recently, 2 Blackberry phones, belonging to Benazir Bhutto were handed over to the joint investigation team conducting an inquiry into her murder on Thursday, reported Express Tribune.

Today, the newspaper broke another news which claims that data from the blackberry has been retrieved by the investigation team which reveals that Benazir Bhutto was promised Prime Minister’s slot from highest authorities in both Pakistan and the United States that.

Paper claims that close to 60 e-mails, dozens of text messages and close to four hundred contact numbers have been retrieved from both the BlackBerry phones.

“Respected Prime Minister (Benazir Bhutto), the United States confirmed that a crucial message had been sent to intelligence agencies of Pakistan, specifically not to interfere in party affairs and stay away from the electoral process.  Secretary of State Condoleeza Rice and director-general Inter Services Intelligence (ISI) have done a secret deal for your (Benazir Bhutto) premiership.

An email was sent by Benazir to Ron Suskind, an American journalist, some days prior to her assassination. The former prime minister, while referring to the then president of Pakistan Pervez Musharraf said that he wrote to his friend that he (Musharraf) gave her an alarming message:

“You (Benazir) should understand that your security is based on the state of relations between you and me (Benazir and Musharraf).”

In another e-mail, dated October 26, 2007, the slain PPP leader wrote a letter to her advisor in Washington DC, Mark Siegel, in which she expressed dissatisfaction over her security.

“Nothing will happen, just wanted you to know. If it does, in addition to the names in my letter to President Musharraf, I would hold Musharraf responsible.

I have been made to feel insecure by his minions and there is no way what is happening in terms of stopping me from taking private security or using tinted windows of four police mobiles to cover all sides could happen without him (Musharraf).”

Bhutto also sent an SMS message to Daphne Barak, a famous interviewer who often writes for Mail Online. In reply to an SMS message, Barak wrote:

“Bibi, you are going to Pakistan. It’s a trap for you now. But you are insisting to go back.”