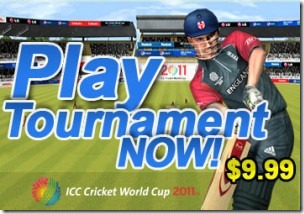 Mindstorm Studios, a Pakistani games development company, announced today that it is developing the Official Game for the upcoming ICC Cricket World Cup 2011, an event followed religiously by over a billion fans around the globe.

The game, “Cricket Power” (www.cricketpower.com), is set to be the most advanced 3D browser cricket game developed to date.

It will feature all 14 official teams along with official players, stadiums and kits. The game will be powered by a superior cricket engine at its core, coupled with a pick-up-and-play interface to appeal to casual and core gamers alike.

“We are extremely excited about developing the official game for ICC’s Cricket World Cup 2011” said Babar Ahmed, CEO Mindstorm Studios. “Cricket has long been a subject closely linked to our organization and we are thrilled to take it to the next level.”

The game will be published by ADMC (Abu Dhabi Media Company) and is available at www.cricketpower.com.

Mindstorm Studios is a young startup company from Pakistan. All the software professionals, coders, designers and the management are Pakistanis. It has received no outside funding. The team is self-taught. It has managed to cross all hurdles, conquer all challenges and emerge as a champion.