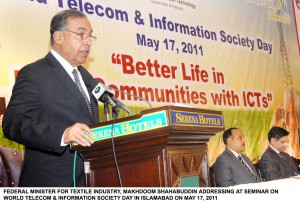 To commemorate World Telecom and Information Society (WTIS) Day 2011, Ministry of Information Technology, in collaboration with Telecom Industry and Universal Service Fund, held a grand event in Islamabad which was attended by prominent personalities from all sections of life, including parliamentarians, government officials, representatives of public sector, industry and academia.

WTIS theme for this year is “Better life in rural communities with ICTs”, therefore Universal Service Fund played a major role in the celebrations, creating public awareness about the theme.

In the same context special supplements were published by main newspapers, whereas others also carried articles and advertisements related to the theme. Similarly banners, streamers and gantries were displayed at prominent places in the Federal Capital, Islamabad, as well as all the provincial capitals, Karachi, Lahore, Peshawar and Quetta.

The Chief Guest at the event, Federal Minister Makhdoom Shahabuddin and Federal Secretary Information Technology, Saeed Ahmad Khan, in their respective speeches emphasized on the need of ICTs to achieve desired level of prosperity in the country by focusing more on the rural areas of Pakistan.

Earlier a video message from Secretary General International Telecom Union (ITU) was played in which the Secretary General  conveyed that ICTs provide enhanced opportunities to generate income and combat poverty, hunger, ill health and illiteracy. He also added that ICTs and related e-applications are key instruments in improving governance and rural services,

On this World Telecom day 2011, Universal Service Fund also launched a documentary which sheds light on the enormous benefits being brought through it’s Programmes for rural communities. This documentary mainly comprised of interviews of people in rural and sub-urban areas that were so far unserved but who are now utilizing ICT services being provided through USF. The documentary received a very positive response from the audience and was greatly appreciated.

At this occasion Merit Certificates were also awarded to students of remote rural areas who won scholarships being offered by National ICT R&D Fund.

Nadeem Ashraf, Additional Secretary, Ministry of Information Technology, Dr. Muhammad Yaseen, Chairman-PTA and other high officials of Telecom and IT industry were also present at the occasion.

It is noteworthy to mention here that so far USF, through its Rural Telecom Programmes, has provided basic telephony and data services in 3,500 previously un-served villages. Apart from this, 2,900 kms of Optic Fiber Cables have been laid through subsidy contracts connecting 53 unserved Tehsils with 5,300 kms of cables.

And finally to take Broadband Internet to the villages, USF is in the process of launching Multi-purpose Community Telecentres. In Broadband Program, 238 previously-unserved towns now have more than 200,000 USF-funded broadband connections.

Subsidy winning service-providers are obliged to provide free Broadband Internet to all higher-secondary schools, libraries and colleges in their areas. So far 790 such institutions have been covered.