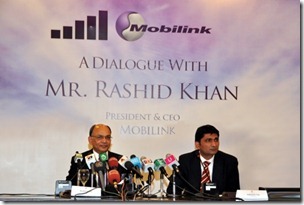 Mobilink today held a press conference to reach out to media, eventually breaking media blackout by telecom operators, to highlight its performance in 2011 and to present company’s strategy for year 2012.

Though the real aim of this media activity is unclear, however, seemingly Mr. Rashid Khan, President and CEO of Mobilink wanted to highlight company’s achievements in year 2011.

Mr. Khan started his presentation with thorough emphasis on Mobilink’s network capabilities, enhancements made during last year and the investments made to stretch the coverage.

Rashid Khan told media that Mobilink is operating with 8,575 cell sites in the country; 6,500 kilometers of fiber optic backbone covering 20,000 towns, cities, and villages with cellular services. Mobilink has roaming services enabled for its prepaid and postpaid customers in 144 countries across the globe.

Other highlights he mentioned were:

CEO Mobilink also mentioned that Mobilink was rated as “Excellent Cellular Service” in PTA’s consumer perception survey held in October 2011. He said that another customer survey conducted by the PTA for 2011, declared Mobilink’s International Roaming services to be the best amongst Pakistan’s cellular operators, based on quality of service and billing.

He said that 2012 promises to be another landmark year for Mobilink, following the implementation of Mobilink’s state of the art intelligent network (IN), which will enable subscribers more control and freedom over their services, and provide a consumer experience that is the best in Pakistan’s cellular environment.