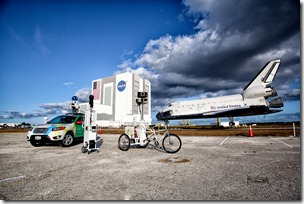 Space and touring enthusiasts (from Pakistan who can’t afford going to USA) can now walk through the Kennedy Space Center, the launch pad for NASA’s every manned mission since 1968, with Google Street View – giving you the exact sight seeing, look and feel of KSC with the comfort of sitting in your home.

Google said that the collaboration between Street View and NASA happened to celebrate the 50th anniversary of Kennedy Space Center.

“We are pleased to partner with Google on the new Street View project, which offers the public a behind-the-scenes look at the Kennedy Space Center’s unique facilities that launched humans to the moon and Space Shuttles to low Earth orbit. Viewers also will get a peek inside areas where flight hardware was processed, including elements of the International Space Station, and planetary and scientific payloads,” said Lisa Malone, director of KSC Public Affairs.

Go to the top of the enormous launch pad, have an Aerial peek at KSC compounds, peer up at the towering ceiling of the Vehicle Assembly Building (taller than the Statue of Liberty) and get up close to one of the space shuttle’s main engines, which is powerful enough to generate 400,000 lbs of thrust. All this possible with the click of a mouse. Amazing world this has become.