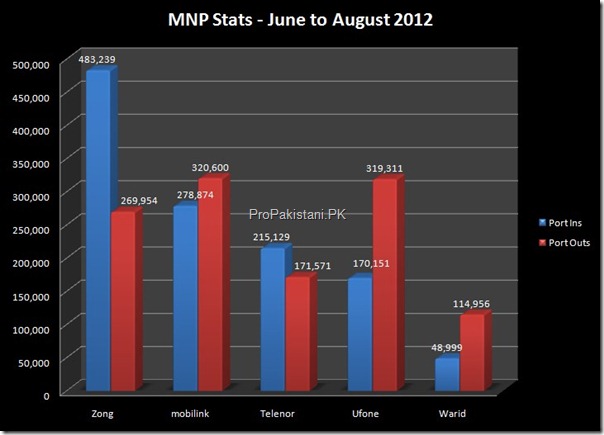 Zong has received more MNP customers than any other cellular operator in last three reported months with 483,239 mobile phone subscribers porting-in to Zong from June to August 2012, reported Pakistan Telecommunication Authority in its recent most MNP stats.

MNP or Mobile Number Portability is a facility through which mobile phone subscribers are allowed to change their network while retaining their numbers.

Ufone and Mobilink turned out to be largest MNP donator as both companies sent out around 320,000 MNP customers to other networks.

Warid processed 114,956 MNP requests for moving out of its network.

Check below graph for up-mentioned figures:

Mobile phone operators keep offering lucrative deals and packages for new and MNP customers to increase their subscriber base.

It maybe recalled that local channel partners, such as retailers and franchisees, are often found involved in MNP Scams, i.e. they initiate MNP requests without users’ consent.

It merits mentioning here that not all MNP requests are entertained for reasons such as: SIM not Registered, incomplete documentation, outstanding balance and others.

Following graph shows the number of total port-in requests initiated by customers and rejected requests by all operators: 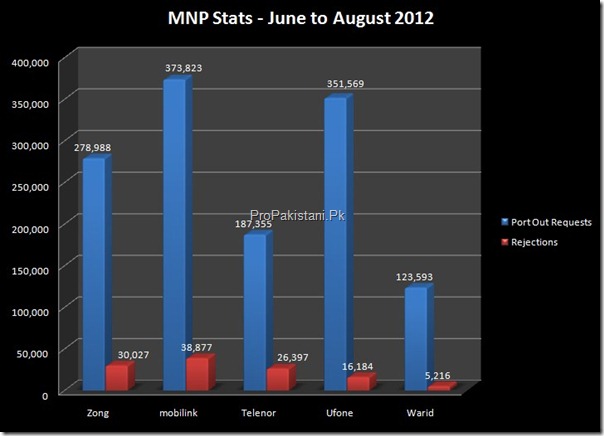