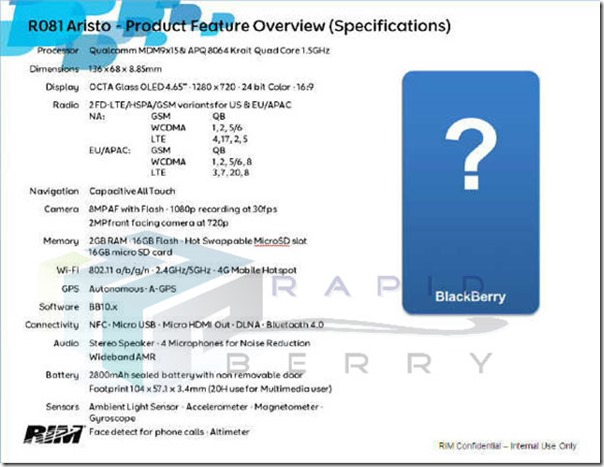 Since we know that Research In Motion (RIM) is planning its BlackBerry 10 running L-Series (Full Touch screen) and N-Series smart phone with physical QWERTY keyboard for an early 2013 launch. But The BlackBerry leaks are coming thick and fast this week, with the BlackBerry 10 named as Aristo (Greek for “the best”), the latest in a string of spec-based reveals.

According to a leaked internal document, The BlackBerry Aristo is powered by a Qualcomm APQ8064 quad-core Krait processor running at 1.5GHz quad-core Qualcomm Snapdragon S4 processor coupled with 2GB of RAM. The smart phone also impresses with a 4.65-inch OLED display of HD resolution. The screen is said to use OCTA Glass made by Samsung, which eliminates an additional touch screen layer and integrates the touch sensor directly onto the AMOLED panel instead.

As a result, the BlackBerry 10 Aristo will measure just 8.85mm thick. Certainly, it’s not the thinnest device out there, but it’s the slimmest one in RIM’s portfolio. Connectivity is reportedly going to be pretty solid as well with NFC, Bluetooth 4.0, high speed LTE radio, microHDMI out, Wi-Fi Direct, DLNA and microUSB.

If it’s just not enough to impress you, the Aristo is rumored to pack in an 8 MP camera with auto focus and LED Flash, 2MP front-facing camera that is capable of shooting 720p video.

There’s 16GB of internal storage, which would be expandable via microSD card slot. The leaked slide also suggests a beefy 2,800mAh battery which would be sealed with non-removable cover.  The specifications of the Aristo sound as if it is high-end Android Smartphone but will actually run on BlackBerry 10 OS.

If the slide info is trustworthy then it would be more excited to see how the device turns out to be, when RIM announces it.