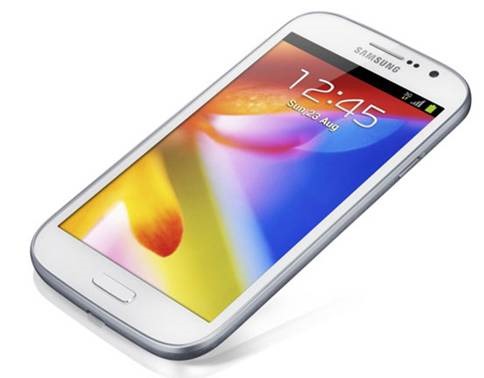 Continuing the Galaxy smartphone series, Samsung has now added another big screen phone to its line-up with the unveiling of rumoured Galaxy Grand with the looks of a Galaxy note 2 and the internals of Galaxy S II, a five-inch Android smart phone apparently designed for mid-range consumers.

Samsung Galaxy Grand will become in two variants, one with single SIM options, while another variant will support dual-SIMs.

Measuring 9.6mm thick and weighing 162 grams, the Grand features a 5-inch TFT LCD with 400 x 800 WVGA resolution sports a white body that looks like most of the recent Samsung smart phones floating around the market.

Inside, this device is powered by a 1.2 GHz dual-core processor running on Android 4.1.2 (Jelly Bean). It is embedded with 1 GB of RAM and 8GB of internal memory with a microSD slot that expands up to 64GB.

Other features include, Samsung’s TouchWiz interface on top of Android 4.1.2 Jelly Bean with the range of usual perks included on other Galaxy models like S Voice, multi window mode, Direct Call, AllShare Play, Smart Alert, Popup Play and all the Samsung Hubs.

Samsung plans to release this phone in two variants, the dual-SIM I9082 and the single-SIM I9080 but so far, there is no information on pricing and availability for this device.