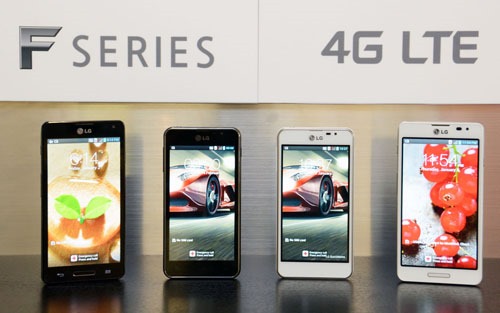 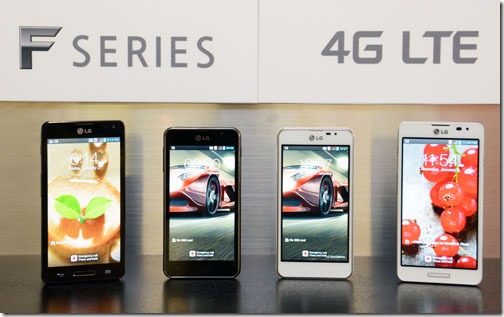 Earlier this week, LG unveiled a number of new smartphones, L-series II and now LG has just took the wraps off by its LTE enabled flagships, the Optimus F7 and F5.

LG has showed these devices in the mid-range segment that will be showcased at Mobile World Congress.

Apparently, the LG Optimus F7 is the higher specification of LG’s new smartphone featuring a 4.7-inch True HD IPS display with a resolution of 720 x 1,280 pixels, working out to a retina-like 312ppi.

Inside, running on Android 4.1 Jelly Bean, the device is powered by a 1.5GHz dual-core processor paired along with a whopping 2GB of RAM that is fairly a solid productivity package. Internal storage is 8GB but you can expand that with microSD cards of up to 32 GB.

On camera front, Optimus F7 features an 8-megapixel snapper with a 1.3-megapixel front-facing camera for a perfect video conferencing. What is especially impressive about the F7 is its stronger 2,540mAh battery.
Let’s go through key specifications for F7:

On other side, LG Optimus F5 is a pretty standard mid range smartphone and physically smaller by F7 as it sports a 4.3-inch IPS display with qHD resolution (960 by 540 pixels). Apparently, it is thick at 9.3 millimeters, which is okay considering that there’s a 2,150mAh battery at its back.

On hardware front, it is powered by a 1.2GHz dual-core processor and 8GB of on-board memory which can be expanded by another 32GB using a microSD card backed up by 1GB of RAM.

However, both Smartphones come pre-loaded with the company’s custom interface featuring LG’s QSlide multitasking tool and the Live Zooming perk.

Here are key specifications for F5.

Availability of these devices:

LG Optimus F5 will launch in Europe first during the second quarter of 2013, followed by the Optimus F7 and then will move other regions. However, details about pricing have not been announced yet.