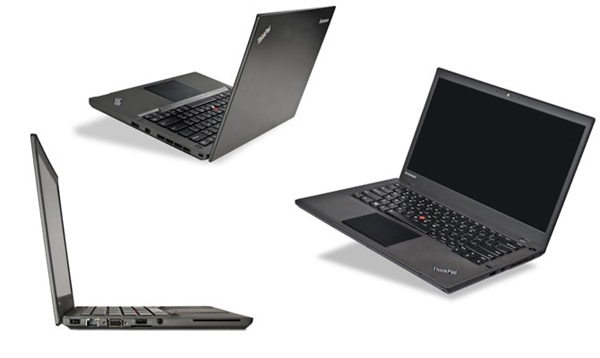 Lenovo has announced yet another laptop in the popular ThinkPad lineup. The new T431s is the successor to the T430s and comes with either Windows 7 or 8.

From the outside, it looks like any other ThinkPad laptop thanks to the boxy & rugged design and the popular TrackPoint. This one, by the way includes a hinge which makes the laptop movable by up to 180 degrees from the center.

The biggest blow you receive upon checking out the specs of this ultrabook is that it comes without the all-so-important touchscreen which is helpful while navigating through Windows 8 environments. Specs are quite good other than that. It comes with a 14 inch display with resolution of 1600 x 900 pixels. Under the hood you get a 1.8Ghz Intel Core i5-3337U processor, 4GB of RAM and Intel HD Graphics for the starting model, along with a 320GB hard-drive.

Connectivity options are fine too with an Ethernet port, Mini DisplayPort, 2 USB 3.0 ports, SD card reader, Wifi, WWAN, Bluetooth 4.0, 3.5mm headphone jack and 720p HD webcam. A 47WHr battery can power the unit for over 8 hours. All this package comes in a body which weighs about 1.6kg heavy and just over 2cm thick. These were, by the way the specs of the base model. If you are willing, you can get up to 12GBs of RAM, 2.1Ghz Core i7 processor and an optional backlit keyboard.

Talking of keyboards, this keyboard also houses Lenovo’s traditional TrackPoint device (knob describes that better) in the middle. There’s also an improved glass TrackPad which now supports up to 20 gestures and has got no click buttons accompanying it. As said above, it will run on Windows 7 or 8, depending on your preference.

The laptop will be released next month for $949. For that you’re not getting a touchscreen but this offering will give you a traditional Lenovo experience and fine specs. And a laptop which can revolve 180 degrees from the middle.