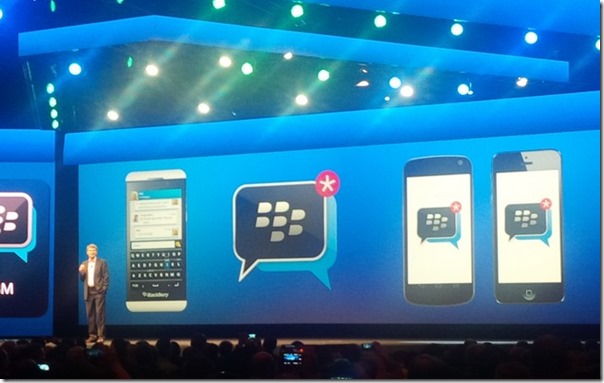 BBM, Blackberry’s signature instant messaging service, will be available for Android and IOS users later this year. With this all Android, iOS and Blackberry devices will be able to cross-communicate using BB10’s feature rich BBM services.

There are over 60 million active BBM users using blackberry devices, who will now be able to connect with their cross-platform friends from Android and iOS.

With this announcement, Blackberry has shown its confident over BB10 – its latest OS release for blackberry devices, however, at the same time company is giving away its one of most handy tools to other operating systems.

This move from Blackberry also hints that firm – once used to be the monopoly in smartphones – is now starting to think about integrating its services with other platforms, which is a good thing.

Blackberry said that app will be free for both Android and iOS users, while iOS 6 and Ice Cream Sandwich will be required to run BBM.

Blackberry said that app will feature messaging and group services initially, however, with time all BBM features will be added for Android and iOS users. BBM has lately started offering screen sharing, BBM voice, video.

BBM for Android and iOS will offer: