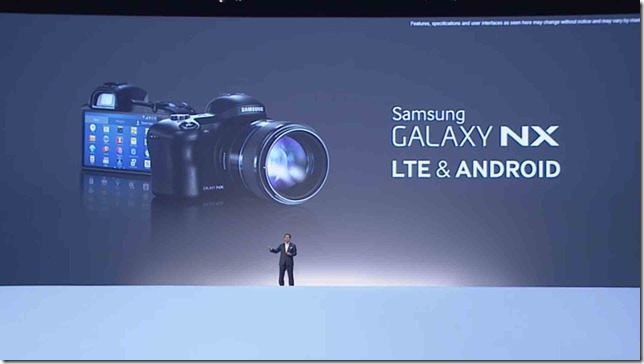 This isn’t the first time we’re seeing a camera running on Android, heck, it is even far from even being Samsung’s first one but is still the best camera spec-wise out there running on the OS. Samsung is really serious this time around.

The first thing you might want to know is that this camera is huge, weighing 495 grams, and that you might be better off with the Galaxy Camera (or S4 Zoom) if you’re looking primarily for a point-and-shoot camera or a phone, because this camera is for experienced photographers mainly.

Firstly, it come with interchangeable lenses, including support for 3D and long zoom ones. The giant lens at the front contains 20.3 megapixels of APS-C class. The electronic viewfinder is of SVGA resolution. The Galaxy NX can shoot up to 8.6 fps in burst mode with maximum shutter speed of 1/6000th second. The top of the camera accommodates an all-so-important xenon flash.

The camera shoots 1080p Full HD video at 24 or 50 fps. Optical Image Stabilization is also there. It will come with 30 different settings which can be used to alter the backgrounds and even creating GIF images, along with Adobe Photoshop Lightroom. These can help even the most inexperienced of users.

Over to the Android part and the Galaxy NX runs on Android 4.2.2 Jelly Bean. The back boasts a gigantic 4.8 inch touchscreen panel of HD resolution. It is powered by a 1.6Ghz quad-core processor with 2 GB RAM. The amount of storage is 16 GB which can be further increased by a card slot. For connectivity it uses Wifi, LTE, GPS and Bluetooth 4.0. The camera also boasts an battery of an enormous capacitiy of 4360 mAh. And of course, it will come with several services pre-loaded to take advantage of the camera’s sharing capabilities.

The pricing and availability details are unknown as of now but do professional shooters really need Android? That question will remain unanswered for sometime but this camera can surely help some starters become professional photographers.